Adam Christopher Scott, grandson of Albert Lea couple Jerry and Doris Schafer, will star as Hugo in the new kids’ television series “Hello, Jack! The Kindness Show,” which premieres Friday exclusively on AppleTV+, according to a press release. 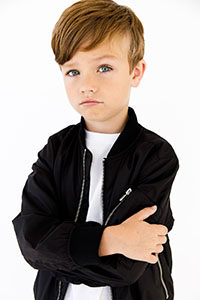 With a recurring role in Season 1, Scott along with anchor Jack McBrayer (“30 Rock,” “Phineas and Ferb,” “Wreck-It Ralph” franchise) and cast, invite preschoolers into the fictional town of Clover Grove where little acts of kindness look to change the world. The show inspires kids to solve problems with kindness and heart.

Scott is excited to be a part of the kindness revolution the show is looking to ignite.

“I think my character Hugo will impact young kids in a positive way and show them that all acts of kindness can make a big difference in today’s world,” the 7-year-old said.

Scott was born in 2014 in Minnesota. His career began in 2018 including print modeling stints with Target, Once Upon a Child, Ripple Foods, Soft Landing Kids and Mindware. His mother, Bryn, grew up in Albert Lea.