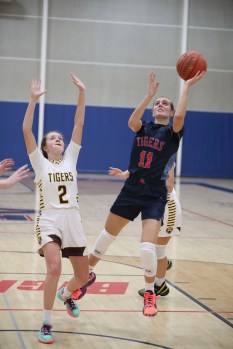 Taya Jeffrey brings up the ball to make a shot in the Tigers’ game against Stewartville Tuesday night at home. Albert Lea lost 74-50. Kelly Hendrickson/for the Tribune 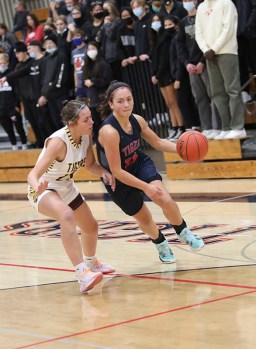 Albert Lea’s Kendall Kenis brings the ball down the court against a Stewartville opponent Tuesday night. Kelly Hendrickson/for the Tribune 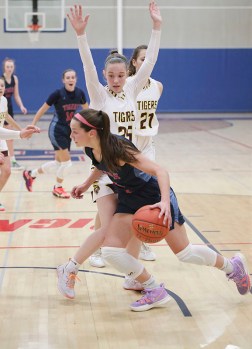 The Tigers struggled in the opening portions of both halves, ultimately leading to their downfall, losing to Stewartville 74-50.

Turnovers plagued the Tigers early in the game, giving the ball away and leading to multiple  Stewartville baskets. Stewartville quickly pushed the lead to double digits. Aside from a couple of free throws from senior Taya Jeffrey, it wasn’t until about 10 minutes left in the half when Albert Lea scored its first basket from the field.

Jeffrey went on a small run herself in the final five minutes of the first half. Jeffrey reached double digit points in the run and closed the gap to 28-16 with just over three minutes remaining. The Tigers continued their comeback run through the remainder of the half, rallying to make it a two-point game by halftime 28-26.

After a big run to end the half, Albert Lea again came out slow to open the second half. Stewartville took a timeout leading 31-29 with 14:36 left in the game, and the break paid off as they went on a 15-2 run over the next five minutes of game play to take a 46-31 lead with nine minutes left in the game.

The Tigers once again found their scoring stroke late in the half, but it was too late for them to mount any sort of comeback this time.

Albert Lea falls to 0-1 to start the season, they will be back on the court Friday when they host the Wingers of Red Wing.