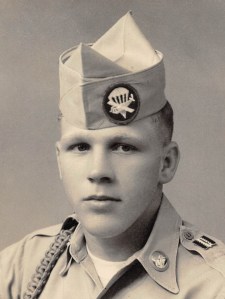 Charlie left school at the age of 17 to serve his country during the Korean conflict, volunteering as a paratrooper in the 187th Airborne. After discharge from the Army, Charlie met and married Sharon Jensen, making their home in Albert Lea and raising their four children: Scott (Andrea), Kathy (Lance), Kevin (Anndrea), and Jeff. The two later divorced

Charlie worked hard to support his family, building a business after time at Wilson & Co. and becoming a successful entrepreneur. Charlie co-owned and operated B&M Distributing, had various real-estate ventures, and eventually started Charlie’s Liquors on the corner of Main and Front street before finally retiring.

After retirement, Charlie pursued and enjoyed golfing, fishing, hunting, playing cribbage with family and friends, and winters in Florida.

Charlie was very proud of his service to his country. He was honored with a flag that was flown over the Nation’s Capital, presented to him by Senator Al Franken on June 14, 2017. Charlie was most proud of his family. Family time was always a priority, attending any and all activities or special occasions. His smile and hugs will be missed by everyone that knew him.

Preceding him in death were his parents, brothers: Howard, Ole, Jerry, his twin brother, Chauncy, and his granddaughter, Kathy Curran.

A visitation will be held from 11:30 a.m. – 1:00 p.m. Thursday, November 4, 2021 at Zion Lutheran Church in Albert Lea. A memorial service will begin at 1:00 p.m. with Pastor Matthew Lehman officiating. Military Honors will be provided by the Albert Lea Area Veterans.