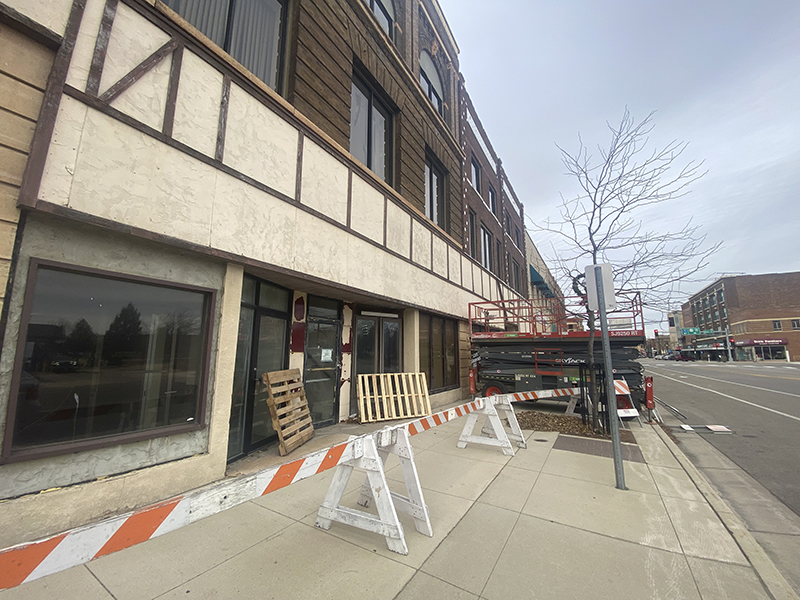 The buildings being considered for demolition are at 324 and 332 S. Broadway downtown. Sarah Stultz/Albert Lea Tribune

The city of Albert Lea is looking into demolition next year of two downtown buildings in disrepair on the 300 block of Broadway.

Discussion about the buildings came up during the Albert Lea City Council’s workshop before the council meeting Monday. The council was looking at possible projects to include in the city’s capital investment plan for 2022.

City Manager Ian Rigg said the buildings at 324 and 332 S. Broadway are in such a poor state that there is no feasible way of restoring them, and the city took possession of them with the understanding that demolition would be likely. The city approved the acquisition of the 332 S. Broadway property under tax forfeiture in 2015 and 324 S. Broadway in August of this year. The buildings are joined into one storefront.

“We were just too late to save them even 10 years ago,” Rigg said.

The city is also looking at mitigation at 310 S. Broadway.

He estimated between hazard removal, architects, other administrative costs with the state, demolition and putting in some kind of reuse — whether it be parking, a park or a combination — the combined 324 and 332 S. Broadway properties could cost about $550,000.

“To restore the buildings to a stable frame it would cost millions each, while stabilizing the 310 structure is about $200,000,” Rigg said. “How soon we get to some properties that are left abandoned or in disrepair makes a huge difference in preservation ability and costs.”

Regarding the building at 310 S. Broadway, Rigg said the city may be able to sell it as a stable shell, depending on the market. If not, the city may have to put more money into protecting the structure through heat and electricity if it appears it will not sell to a developer who would start finishing the interior right away.

According to documents on file with the National Register of Historic Places, the building at 332 S. Broadway was constructed between 1891 and 1899 and was known as the Nissen Block, originally housing the Nissen Hospital and doctors’ offices on the first, second and third floors. It was later converted for commercial and residential use, including a drug store, grocery and market, a jewelers, a furniture store, a music and optical company and a hobby and craft store over the years. Albert Lea Broadcasting Co., which operated KATE Radio, also was in the building on part of the second and third floors for a time.

In the 1980s, the building was developed as part of the 300 Building and the storefront was merged into the neighboring property.

The building at 324 S. Broadway was originally constructed to house a hotel on the upper floors and businesses on the first. In the early years, it housed a music store, drug store, grocer, candy store and furniture store. Starting in the 1970s, it has housed a tavern and a beauty school. The last known occupants were the Cafe Cappuccino & Deli and Lutheran Social Services of Minnesota.

The building at 310 S. Broadway was constructed before 1886. It was originally operated by Val Blatz Brewing Co. and was half of its current size. Between 1899 and 1905, the first and second floors were extended to the back property line. By 1918, the building was transformed into a billiards parlor. It has also been the home of Bob Wallace Mercantile Co., offices and a furniture store. It was later damaged by fire.

Rigg said the projects on the 300 block of South Broadway are in the Qualified Census Tract and are eligible for American Rescue Plan funds.

The council has not yet made a decision about how to proceed, as there are still some preliminary reports and approvals needed because it is in the city’s historic district.

The city is also planning a $600,000 facade improvement on the Jacobson Apartments building at 211 S. Broadway, which is between the former Freeborn National Bank building on the north and Stadheim Jewelers on the south. Of that total, $272,500 will be paid with a state grant.

The building has cracks developing on mortar joints and terra cotta blocks that are cracking. A few have also fallen off of the structure.

The damaged blocks have to be taken off the building and sent to California or New York for artists to build replacements. The blocks would take several months to dry and would then be glazed to match the existing building.

Rigg said if the projects are approved they are expected to take all of 2022 to fully complete, and may possibly go into 2023.