Elizabeth Mae “Betty” Lundquist, age 94, formerly of Mt. Iron and Duluth, MN, passed away on Tuesday, November 2, 2021 at The Woodlands-St. John’s Lutheran Home on Fountain Lake in Albert Lea, MN. A private family funeral will be held in Duluth, MN. Burial will be in Oneota Cemetery in Duluth. In lieu of flowers, memorials are preferred to French River Lutheran Church, 5310 Ryan Rd, Duluth, MN 55804. Bruss-Heitner Funeral Home in Wells is entrusted with arrangements. Please see brussheitner.com to leave online condolences. 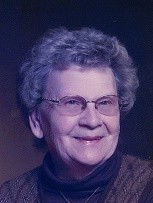 Betty was the daughter of Harold and Elizabeth (Anderson) Olson in Duluth, MN. Betty grew up in West Duluth, graduating from Denfeld in 1944. She worked at Minnesota Power and Light. In 1949, she married her high school sweetheart, Dick Lundquist. They celebrated 66 anniversaries until Dick’s passing in 2015.

Betty was very active in softball, volleyball and bowling. She was also involved in various church circles in Freeborn, Minnesota and Messiah Lutheran in Mt. Iron and French River Lutheran on the North Shore.

Many life-long friends were made as Betty worked along side Dick, owning and operating Cedars Resort in Northome, MN. After their retirement, Dick and Betty returned to Duluth and enjoyed Lake Superior life on the North Shore and on Park Point.

Betty moved to Albert Lea in 2016 to be closer to her children.

Betty will be greatly missed by her children: Julie Meyer of Wells, David (Jean) Lundquist of Sherburn and Diane (Jim) Clifford of Sun City, AZ; 7 grandchildren, 4 great-grandchildren; sisters-in-law: Pat Lundquist and Marilyn Lundquist and many nieces and nephews.

The family would like to extend our gratitude to the staff at St. John’s Lutheran on Fountain Lake for the excellent care of our beloved mom.