John Russell Petersen, 90, of Albert Lea passed away on Sunday, Oct. 31, 2021 at St. Mary’s Hospital in Rochester, MN surrounded by his family. 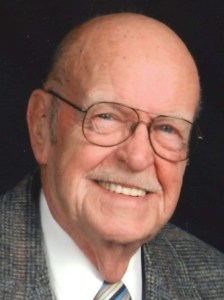 John met the love of his life, Mary Ann Campbell while stationed at Bunker Hill Air Force Base in Kokomo, Indiana. They were united in marriage in 1964 and later returned to live in Albert Lea.

John was a life-long member of Trinity Lutheran Church, the Danish Brotherhood, the Disabled American Veterans, the American Legion and the Moose Lodge.

John is remembered fondly by many for his infectious smile and the way he enjoyed visiting with people. John enjoyed spending time with his grandchildren, flower gardening, working in puzzle books, and watching for deer at the Myre-Big Island State Park. John and Mary Ann made frequent trips to Branson, Missouri, where they formed many close friendships with performers in the Branson area.

Visitation for John will be on Thursday, Nov. 11 from 4-6 pm at Bonnerup Funeral Service, Albert Lea. The funeral service will be held Friday, November 12 at 10:00 am at Trinity Lutheran Church in Albert Lea, with visitation 1 hour prior to the service. The Reverend Eileen Woyen will officiate. Internment will be at Hillcrest Cemetery in Albert Lea. Military honors will be accorded by Albert Lea’s veteran’s organizations.

In lieu of flowers, memorials may be sent to Trinity Lutheran Church in Albert Lea, MN and the Alzheimer’s Association.