Larry Arends passed away peacefully on November 3, 2021, at his home in Prior Lake, Minnesota, under home hospice care, due to complications of a rare liver disease, Primary Sclerosing Cholangitis (PSC). 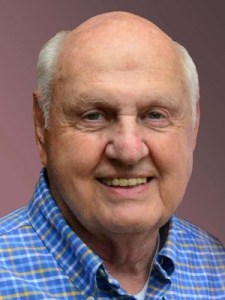 One of the last of a generation to be delivered at home, Larry was born on a farm between Jewell and Stanhope on August 31, 1937, to Art and Jennie (Hassebrock) Arends. He attended kindergarten through 4th grade in a one-room schoolhouse, Clear Lake #7, southeast of Stanhope, and graduated from Stanhope High School in 1955, in a class of 14. Larry was a proud member of the Future Farmers of America. He served as a State Officer, and earned the American Farmer degree in 1957.

After farming and raising turkeys in the Stanhope area with his brother Richard, he followed his high school sweetheart, Jane Carlson, to Iowa State. They married on July 2nd, 1958, at the Christian Church in Stanhope, and resided in the “old” Pammel Court.

After graduating from Iowa State with a degree in Animal Science in 1961, he was commissioned as a 2nd Lieutenant in the US Army Artillery. He and Jane travelled to Augsburg, Germany, where he served on active duty for two years in the 7th Artillery, 24th Infantry Division. He enjoyed some of the happiest times of his life there with Jane, travelling across Europe, serving with his unit, and welcoming their first child, Tim. He continued his service in the Iowa National Guard in Boone and the Colorado National Guard in Longmont, leaving the Army in 1970 as a Captain.

In 1976, Jane and Larry returned to Stanhope, where they bought a farm and Larry worked for Triple F Feeds in Des Moines. An entrepreneur at heart, he became an independent Consulting Nutritionist in 1980, and worked for several animal health and feed companies, conducting research trials. Always interested in new technology, he worked for one of the first veterinary practice management software companies. He travelled across six Midwestern states and the Las Vegas area from 1983 to 1993, but still made it home to his sons’ football games and concerts—not missing a South Hamilton football game for 11 years. He left the nutrition industry and moved to Albert Lea, Minnesota, in 1993 to join his brother Al Arends, and became a Retirement Plan Consultant for Alliance Benefit Group, retiring in 2008.

Larry and Jane moved to Prior Lake, Minnesota, in 2009 to be closer to their son Tim and his family, where he enjoyed being the “senior member” of his Saturday morning coffee crew. He was a devoted patron of the Prior Lake Library.

Throughout his life, Larry enjoyed travel, both throughout the US in an RV that he bought with a sales commission, and internationally, including Russia, South Africa, and Western Europe. Highlights included a trip to Alaska, and to Europe following “The Band of Brothers,” a World War II Airborne Company. He was a strong believer in education, and was proud of his degrees and those of his four sons, who all earned three degrees. Larry enjoyed having a nice car, and purchased a new Lexus just two weeks before his death. He was determined to “break out of a rut,” and made sure he bought a blue car, a change from his usual silver.

He was preceded in death by his parents, Art and Jennie (Hassebrock), two of his three brothers, Richard and Art, and his beloved dog, Heidi. He is survived by his wife, Jane, his four sons Tim (Rhonda), Mark (Anne), Chris (Susan), and Andy (Christy), nine grandchildren (Matt, Kristyn, Brock, Case, Nick, Robert, Abby, Ben, and Grace), his granddog, Frannie, his brother, Alan (Pat), and his sister-in-law, Mary.

The family will be holding a memorial service on Saturday, December 4, 2021, from 1:00 – 4:00 PM at the Stanhope Community Center, 600 Main St., Stanhope, Iowa. Memorials may be directed to your local public library, the Iowa FFA Foundation (https://www.iowaffafoundation.org/), or the National Parks Foundation (https://www.nationalparks.org/).