Minnesota unemployment rate ticks down to 3.5% 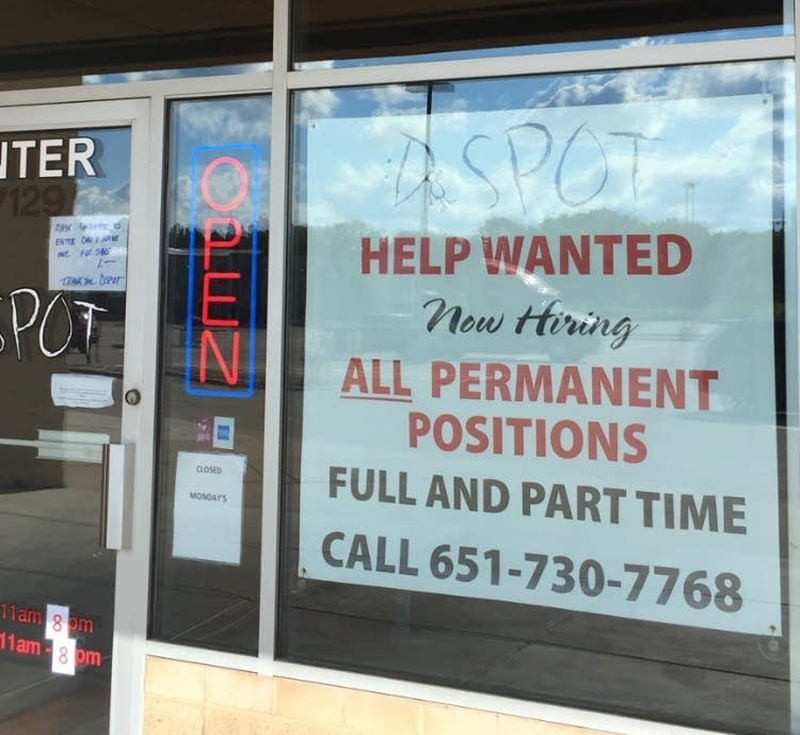 A large help wanted sign hangs near the entrance to D-Spot, a restaurant in Oakdale in July 2020. Mark Zdechlik.MPR News 2020

Minnesota added jobs in October for the seventh straight month, and the state’s unemployment rate is back to where it was prior to the onset of COVID-19 disruptions.

Total employment rose by a few thousand jobs and the unemployment rate ticked down to 3.5% in October, according to seasonally adjusted figures released Thursday by the Department of Employment and Economic Development.

Minnesota is still behind its total employment level above 3 million jobs prior to the pandemic — at 2.926,392 now. But the number of people considered unemployed has fallen to its lowest number, about 106,000, since before the pandemic first upended the economy.

Some of that is attributable to a shrinking labor force spurred by people giving up the job hunt or retiring rather than look for new work.

Overall, the state estimates about three-quarters of the jobs lost since COVID-19 and measures to fight it shook up the economy.

The statistics show wages are noticeably up in Minnesota but inflation is taking a big bite out of those gains.

Year-over-year gains in average hourly earnings were 6.3% in the figures from the state department. But that coincides with a consumer price index increase of 6.2% over the same span.

“What we are seeing is a very tight labor market that is driving up wages, particularly in those low-wage occupations that are in very high demand right now,” Casale said.

Job gains were seen in most sectors in October, led by professional and business services and manufacturing. Two sectors lost jobs — information and local government.

Minnesota’s 3.5% unemployment rate isn’t evenly felt across demographic groups, with Black and Hispanic residents more likely to be out of work than those who are white.

The state’s unemployment rate is a full 1.3 percent better than the national jobless rate, which is a bigger gap than the month before.