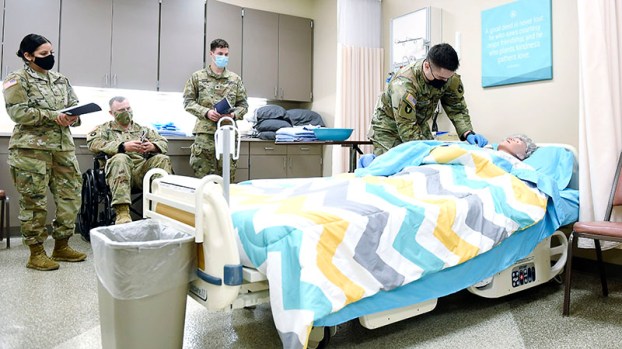 Members of the Minnesota National Guard were at Riverland Community College Monday and for the rest of the week to become a CNA and later deployed in the fight against COVID-19. Eric Johnson/Albert Lea Tribune 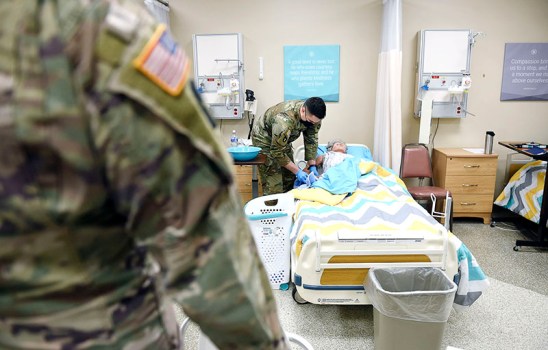 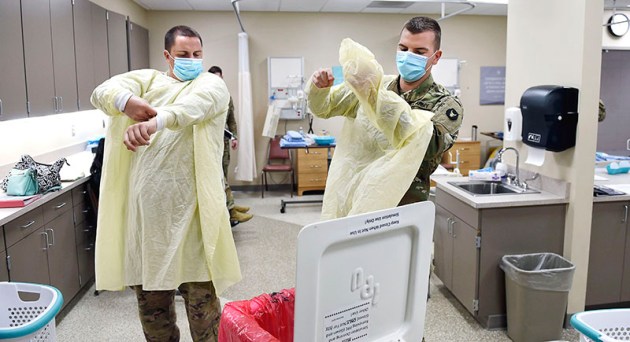 Throughout this week, members of the Minnesota National Guard are at Riverland Community College in Austin, learning the skills necessary to receive certified nursing assistant certificates.

The National Guard’s Task Force COVID will put men and women of the Guard in a support role, allowing them to care for non-COVID patients transitioning from Minnesota hospitals  to these facilities, which are in nursing homes, in an effort to alleviate stresses being put on the facilities and their health care workers.

Early last week, Gov. Tim Walz activated the National Guard to support staffing shortages brought on by the ongoing COVID-19 pandemic and now Riverland is helping them with the necessary schooling toward that end.

“What we were called in for was emergency training of the National Guard,” said Director of Nursing Assistant and Home and Health Aid Dr. Kara De La Fosse. “What we’re trying to do is fill that critical shortage of healthcare workers that are leaving the profession or [facilities that] are short staffed.”

In a program that is normally completed in a month’s time, guard members have just over a week’s time to complete 75 hours of coursework, which is required as a prerequisite for advancing to RCC’s nursing program.

At the end of the eight days, those taking part in Task Force COVID will receive a certificate that will clear them to work at facilities throughout the state.

“Because the hospital capacity is maxed out or the staffing is short, they can’t man all of the beds,” Douty said. “The patient will stay in ICU for one day and then transfer the patient from the hospital to this transitional facility where the National Guard is currently, and then we’ll help care for that patient for the remaining days that they need the assistance.”

Currently, the state has activated just over 450 soldiers, including 300 who were activated last Friday. Another 100 were activated this Monday and are reporting to Camp Ripley, just north of Little Falls.

There are plans for more soldiers to be mobilized at a later date, but there are no firm details as to how many or when they might be activated.

While the training is rapid, soldiers will be able to step in and get right to work.

“The training is all sorts of proper CNA training so we can go in and properly give care to those Minnesotans who are in need,” said Staff Sgt. James Jeffries-Sherwood, non commissioned officer in charge, who is overseeing the training on the Guard’s end of things. “Anywhere from proper hand washing to transportation and the whole range.”

Even though the training has been swift and requires soldiers to learn a lot of technique quickly, De La Fosse has been impressed with just how well they’ve been doing.

“It’s amazing,” she said. “The caliber of students we have is very impressive. They are well disciplined. They’re task-orientated. They listen effectively. I’m impressed, honestly impressed, with what I’m seeing.”

It’s a situation that has at least become adaptable.

So far, many of the soldiers activated have been on volunteer bases, with only some being ordered to report for duty.

It was a conscious effort by the Guard to minimize hardships on employers and families.

“What we did as a National Guard, in concurrence with our Adjutant General [Major General Shawn Manke], was we requested volunteers up front,” Douty said. “Any time there is a state mission like this we try to ask for volunteers first. That way we don’t put any more hardship on families or employers … as much as we can.”

The Guard also avoided calling on those already working in the health care field so as to avoid putting any more stress on it.

“Our Adjutant General does not want any guard members that are CNA authorized already or a nurse to come to military duty because you’re really just robbing Peter to pay Paul,” Douty said.

This current mobilization is another instance of activation in a short amount of time. Most notable was the civil unrest in Minneapolis in the aftermath of the George Floyd shooting in 2020.

Nor is it the first time that the National Guard has come to Austin in the past two years. Five National Guardsmen, consisting of one registered nurse and four medical technicians, were sent to Austin in October of 2020 to help with an outbreak at Sacred Heart Care Center.

“I think in 2020, 2021 it has increased almost 115%,” Douty said. “Somewhere in that nature. It’s just been a crazy amount of activations we’ve had and it’s just been, I think, a compounding effect because of some of the civil unrest that’s happened that we’ve had to assist local authorities and then the pandemic at the same time has increased that.”

While the mission is different this time, the dedication to service isn’t.

“Honestly, when I joined the National Guard I was ready for anything,” Jeffries-Sherwood said, who recently came off deployment to Africa. “Whether it’s storm or flood, pandemic or any sort of outside threat. I was ready to answer this call when asked.”

Where that call will take members of the National Guard remains to be seen, even though it will work with its soldiers to keep them as close to home as possible.

“We’re going to try and station him as close to home as possible so it’s not going to disrupt his life 100%,” Douty said, using Jeffries-Sherwood, who is from Mankato, as an example. “Sometimes in leadership spots, we may not be able to locate him near Mankato, but we’re going to do the best possible to not disrupt the lives of soldiers and families.

As it stands now, President Joe Biden has authorized federal spending for United States National Guard units in support of pandemic needs and that funding was authorized through April 1, 2022.

However, just how long deployment will be isn’t completely known.

“Right now we’re going to be on mission,”Douty said. “It could be short, it could go longer just kind of depending on the situation.”

The work the Guard does this week could have future possibilities as well for the soldiers, who will be able to take their certificates and apply them to jobs outside of the National Guard.

Soldiers are getting their schooling in service to their state, though only for CNA certificate. Soldiers are not being certified for the home and health aide side of the department.

“I would love it. I would embrace that,” she said. “If they were receptive to it. That way they are prepared in the event that something happens and they have to fill a shortage … that would be great.”