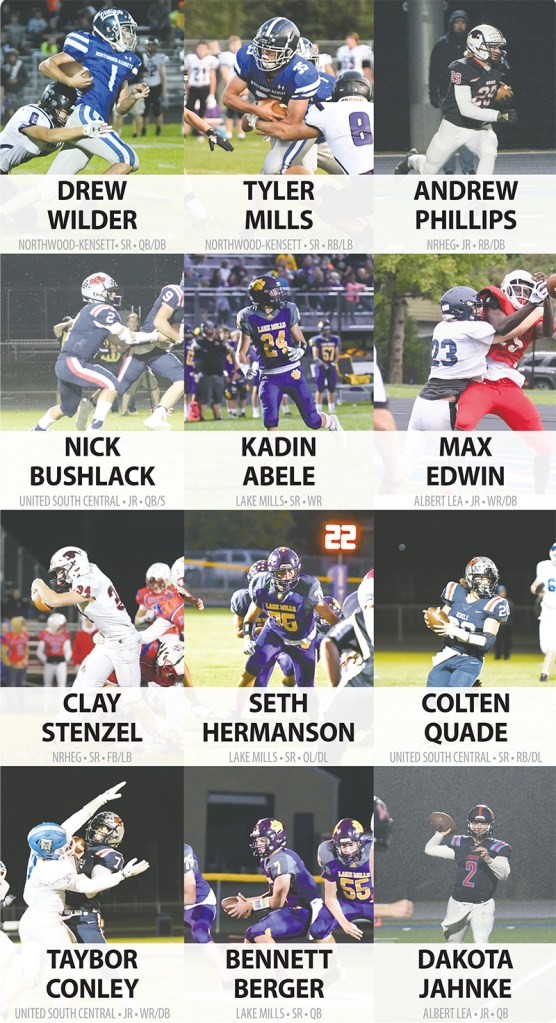 More players than ever before were nominated for this year’s All-Area football team. This year’s first team was dominated by upperclassmen and had nearly all area schools represented.

From heart-pumping close games to dominating blowouts, this season’s area teams had a little bit of everything.

Here is the Tribune’s All-Area team:

Drew Wilder had a big year playing for the Vikings, rushing for a total of 794 yards as a quarterback, the second most in the area. He also rushed for 11 touchdowns and threw for seven more, giving him 18 total touchdowns, also second highest of all the area teams.

Wilder passed for 438 yards on a team that traditionally relies on a powerful run game, while completing nearly 55% of his passes.

Wilder led the Vikings to a state playoff berth and a 6-3 record overall. He will be a tough spot to replace in the lineup next season.

Tyler Mills was a large part of the Vikings’ offense in the 2021 season, rushing for an area-leading 940 yards — more than 140 yards more than the runner-up. He found the endzone 13 times on the ground.

Mills was also a factor on the defense, picking up 31.5 total tackles, four sacks and 4.5 tackles for loss. He was named a first team All-District player each of the last two seasons.

Defensively, Phillips recorded 22 tackles, including six that were in the backfield.

“Andrew is a solid do-it-all back who was really able to carry the workload this year,” said head coach Marc Kruger.

The Panthers ended their season with a 4-5 record and a narrow 13-7 loss to St. Clair/Loyola in the Section 2AA playoffs.

Nick Bushlack led the area in passing yards and passing touchdowns this season with 1,498 yards and 20 touchdowns, the latter of which is a school record for the Rebels. He also rushed in for two touchdowns, accounting for a total of 22 scores this season, the most of all the area players.

Defensively, Bushlack was also in the top five in total tackles with 45, while also recording an interception and forcing a fumble.

“Our offense shifted after losing starting running back Jackson Spizzirri to an ACL injury early in the season and Nick became our focal point,” said head coach Brandon Neseth. “Nick also was a key factor in our strong defense this fall.”

Abele was also a big help on the defense, totaling 55 total tackles, third most in the area. He also recorded one fumble recovery.

Lake Mills head coach Bill Byrnes said Abele is great at coming down with the ball in traffic, and with his size, Byrnes said he will be a good player at the collegiate level.

Max Edwin was in the top five for area players in the receiving yards category, racking up 326 yards in nine games, as well as two touchdowns.

Defensively, Edwin totaled 23.5 tackles, one sack, .5 tackles for loss and one fumble recovery.

Clay Stenzel was a defensive stalwart for the Panthers this season, leading the area in total tackles by more than 10 with a total of 73. He also notched 11 tackles for a loss.

Offensively, Stenzel rushed the ball 17 times for 128 yards and one touchdown.

Kruger had some high praise for Stenzel.

“Clay has had a fantastic season and career,” Kruger said. “Clay has a good chance of being in the all star game and is one of the best defensive players in the whole state.”

Seth Hermanson was another area player who was a force on the defensive side of the ball. Hermanson was second in the area with 62.5 total tackles, first in the area in both sacks with 14.5, and tackles for loss with 22.5. He also recovered two fumbles, one of which he returned for a defensive touchdown.

His 14.5 sacks led the entire state of Iowa, and his 22.5 tackles for loss broke the school record.

Byrnes described Hermanson as a highly athletic defensive end as well as the anchor for the Bulldogs’ offensive line.

“Colten was one of the most complete football players USC has had in recent memory,” Neseeth said. “He did all of the little things well and was a key contributor in every facet of the game, offensively, defensively and on special teams as he was also a strong kicker and punter.”

Taybor Conley is the third Rebel to make the 2021 All-Area team. Conley was second in the area in receiving yards at 502. He also pulled in six touchdown catches and tallied 17 tackles on the defensive side of the ball.

“Taybor was a big play threat all season for us and fought through an ankle injury the last third of the season, but continued to make critical plays in the passing game” Neseth said. “Taybor was also a key contributor on defense with 17 tackles this season.”

Bennet Berger is the third player from Lake Mills to make the All-Area first team, tying them with United South Central for the most players on the first team with three.

Berger led the Bulldogs with 1,316 passing yards on a 44.4% completion percentage, while also throwing for 16 touchdowns. He also rushed for 118 yards and one touchdown.

Byrnes said he was a great leader for the Bulldogs’ flexbone offense. Berger was also named to the second team All-District.

Dakota Jahnke had the second highest number of completions this season with 73. He threw for 837 yards and six touchdowns while also running for one touchdown.