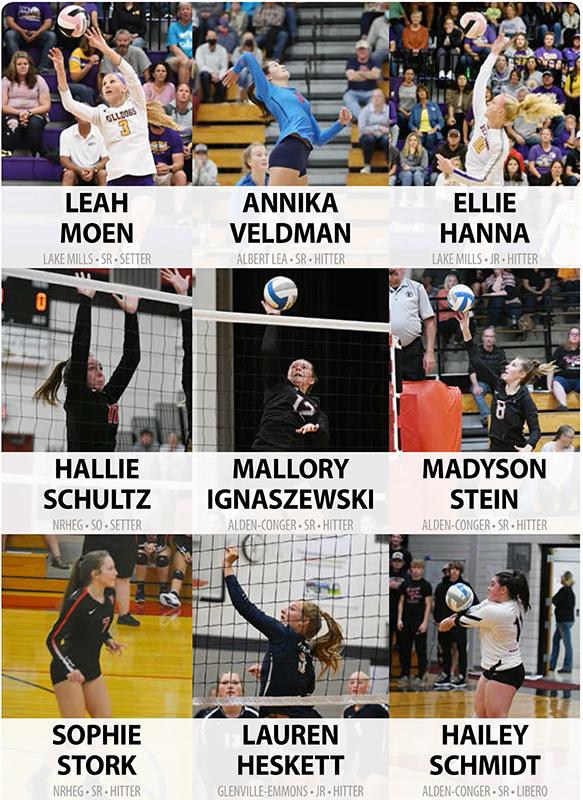 There were a large number of players nominated for this year’s All-Area volleyball team. All area teams had success in their own rights and many improved upon their performance from last season.

Here are the players that had the biggest impacts on their teams this year:

Leah Moen was a big part of the success the Bulldogs had this season. Moen not only led the area in assists, she beat out the runner-up finisher by almost 200 assists. She also totaled 185 digs, 52 kills and 36 aces in 38 matches her senior season.

“Leah had a great year and really proved that she was serving by showing improvement in all areas of her game,” said head coach Jim Boehmer. “She led our offense and that isn’t always easy when you have the depth through the front row that we do. Yet she was able to mix it up and move the ball around for us. She also is a great defender and one of the best servers in the state of Iowa, no matter the class.”

Annika Veldman has played a key role in building the Albert Lea program over the past years. Veldman tallied 1.3 kills per game and one point block per game, playing three rotations per game as the middle hitter.

Head coach Jamie Cameron said Veldman was a necessary piece for the success and the family team atmosphere. The Tigers won eight matches this season, the most since 2016.

Ellie Hanna burst onto the scene this season leading the area in both kills and blocks with 263 and 77, respectively. Moving up from the honorable mention team in the 2020 season, Hanna also racked up 47 digs and 49 aces and had a serve percentage of 88.8%.

“Ellie really started to come into her own this season as a middle hitter,” Boehmer said. “She was often our go-to player in the front row in tight situations. She loves to play the game, and that passion carried us many nights. Her ability to run a faster tempo makes her one of the strongest middles in the Top of Iowa Conference.”

Hallie Schultz is the youngest player on this year’s All-Area first team, as the only sophomore to make the list. Schultz was second in the area with 489 assists while also totaling 29 kills , 24 blocks and 13 aces.

“Hallie is an extremely smart player,” said head coach Onika Peterson. “She knows how to read the defense and where to put our hitters in the most successful place for us to score. We are excited for her to be back for two more years and to see what she will accomplish.”

Mallory took the next step up the ladder, moving into the first team All-Area after making the second team last season. Ignaszewski put up triple digits in both kills and digs this season with 183 and 296, respectively. She also picked up 32 aces and was 96% from the serving line. Her total digs landed her at the No. 4 spot in the area in that category.

“She is an incredible leader on and off the court,” said head coach Jolene Bute. “We needed an outside hitter this year, and with no hesitations, she was still a huge part of our defense. She had a ton of digs as she did in years past being the libero. Also an extremely big part in our serve receive.”

Mady Stein is one of three players to make the All-Area first team for the second consecutive year. Stein was top three in the area in both the kills and assists categories. She was No. 2 in kills with 249 and No. 3 in assists with 289. She also totaled 160 digs, 39 aces and was 93.7% from the serving line.

“Mady has been a three-year starter for us and also had a great senior season,” Bute said. “She was a leader in setting and hitting for us as well as a captain. Mady’s versatility is going to be hard to replace. I’m excited to watch her further her volleyball career, too.”

Sophie Stork played her fourth season on the varsity lineup for NRHEG this season. She totaled 217 kills, which was fourth in the area, while also racking up 120 digs, 30 aces and 20 blocks.

“She was our go-to hitter this year when looking for a kill,” Peterson said. “She was a consistent kill leader and ace server for us. Sophie is an extremely competitive athlete and we wish her the best of luck with her senior year.”

Lauren Heskett joins Moen and Stein as one of three players this season to make her second consecutive All-Area first team. Heskett tallied 319 digs this season, which was second in the area. She also had 143 kills, 30 aces and 14 blocks.

“Lauren is always trying to figure out how to score points for our team,” said head coach Krystle Belshan. “She has a great serve and a very hard hit. Lauren does a great job of reading the ball up at the net and she knows where to place the ball on the other side of the court. Lauren is an all-around player and does a wonderful job reading the ball in the back row as well as digging as she leads our team in digs.

Hailey Schmidt came on in a big way for the Knights this season, making her first All-Area team appearance. Schmidt led the area in digs with 365, over 40 more than the next highest finisher. She also racked up 35 aces and 49 assists, and was 91% from the service line.

“Hailey has been a huge part of our success for the past three seasons and again this year,” Bute said. “Hailey did a great job of covering our back court and taking care of out of system balls. She was extremely valuable in our serve receive rotations.”