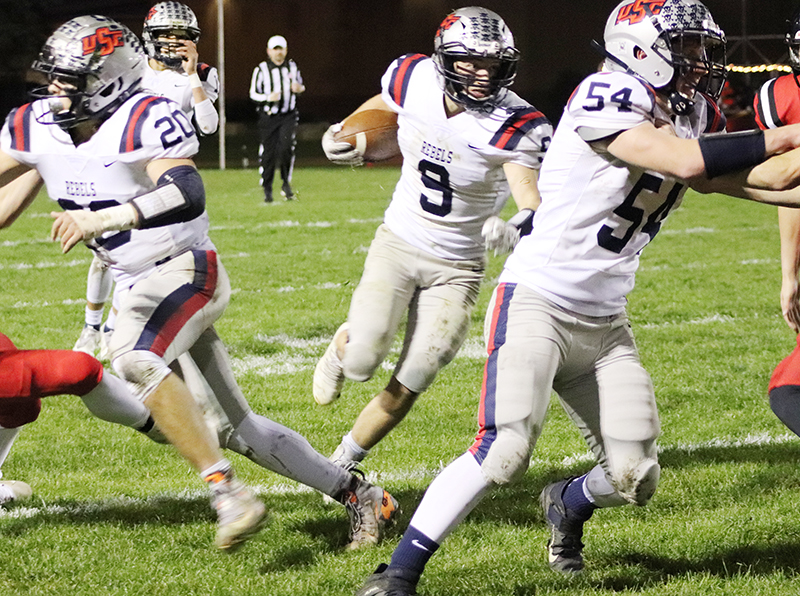 United South Central junior Brendan Drescher finds a hole to run through Saturday against Mayer Lutheran in the Section 2A semifinals. The Rebels lost the Crusaders 35-0. Photo courtesy of Heather Goldman/South Central News

The United South Central football team faced the tall task of squaring up with Mayer Lutheran, the No. 9-ranked team in Class 1A, Saturday afternoon in the Section 2A semifinals.

The Rebels earned their spot in the semis after a 39-7 beatdown of the No. 5 seeded New Ulm Cathedral. However, the  Crusaders presented a bigger challenge, shutting the Rebels out through the entirety of the game and winning 35-0.

The turnover bug was the Rebels’ biggest problem throughout the game, especially in the first half. The Rebels’ first drive ended in an interception after 55 yards of offense were gained. A fumble ended their second possession, followed by back-to-back interceptions on the next two drives.

The United South Central defense held strong for much of the first half, only allowing one touchdown in each the first and second quarters. The first quarter score came on a 62-yard handoff and the second came on a three-yard run.

The Crusaders took a 14-0 lead into the locker rooms at halftime.

Mayer Lutheran came out with a bang to start the second half, returning the opening kick for a 60-yard touchdown to take a 21-0 lead.

The Rebels had five drives in the second half, one of which was the end of the game. Two of the remaining four ended with an interception, one with a turnover on downs and one with a three-and-out punt. The offense struggled to find their footing against a powerhouse defense from the Crusaders.

Mayer Lutheran would go on to score two more touchdowns before the game was over, one on a 15-yard rush and the other on a 26-yard pass completion.

In total offensive yardage, the Crusaders outgained the Rebels 317 yards to 99. United South Central turned the ball over six times, compared to one turnover by Mayer Lutheran.

Nick Buslack was 8-23 passing for 106 yards on the night. Taylor Conley and Luke Pederson caught three of those passes each. Conley went for 65 yards and Pederson for 29. Colten Quade and Jon Martinez also caught one pass each, Quade for 11 yards and Martinez for one.

In rushing, the Rebels were led by Quade who had a total of 18 yards on the ground. Brendan Drescher was right behind with 13 yards on five carries.

The Rebels lose 12 seniors from this year’s team, many of whom played significant minutes on the field.