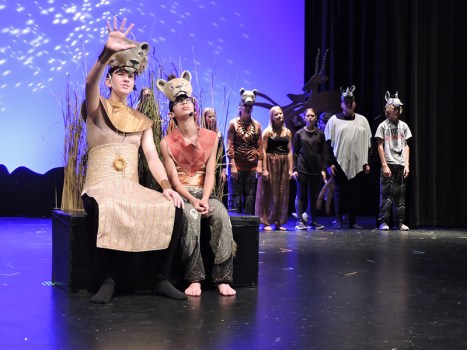 Mufasa, played by Liam Schrader, has a heart-to-heart discussion with his son, Simba, played by Joshua Brooks in "The Lion King Jr." at United South Central this week. Kelly Wassenberg for the Tribune 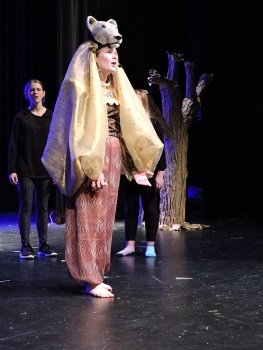 Merideth Klingbeil sings a solo in her performance as Nala in "The Lion King Jr." Kelly Wassenberg/for the Tribune 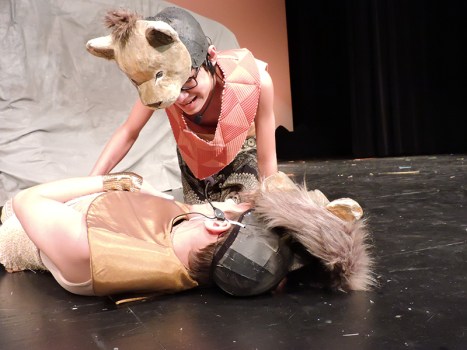 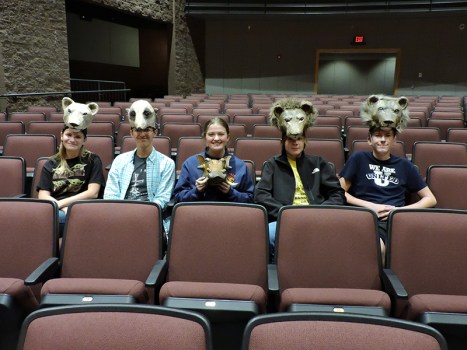 Grace Niebuhr, center, painted the masks used during the United South Central Players production of The Lion King Jr., including those worn by Merideth Klingbeil/Nala, Nick Schindler/Timon, Hayden Chandler/Simba and Liam Schrader/Mufasa. She is shown holding her favorite, one belonging to the character of Pumbaa. Kelly Wassenberg/for the Tribune 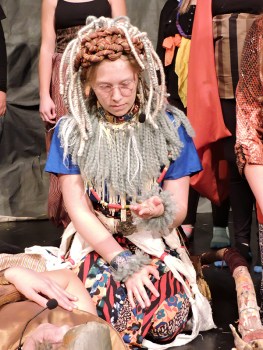 Rafiki, played by Elizabeth Stern, mourns the passing of the king of the Pride Lands. Kelly Wassenberg/for the Tribune

The United South Central Players will present “The Lion King Jr.” at 7 p.m. Friday and Saturday and 2 p.m. Sunday in the USC auditorium in Wells. The production is a 90-minute condensed performance of the Broadway version of the 1994 Disney film, “The Lion King.”

The play will feature a cast of approximately 30 students led by Artistic Director Kristyn Wegner with a crew of another 10 students. The crew is led by Set Construction Supervisor Chris Whiteside.

Unlike other projects Wegner has worked on previously, the challenge of having a cast of characters who all play animals without making them look cartoon-like created a need for considerably more time to be spent on costume design, especially when it came to masks. Wegner estimated the dozen or so masks used by the thespians took about 10 to 15 hours each to make, including assembly and painting time. Many of the masks were made from templates out of cereal boxes and a paper mache clay made out of a recipe of drywall joint compound, toilet paper, flour and glue. Wegner put the masks together while USC junior Grace Niebuhr painted them.

While Niebuhr didn’t have any experience painting animals, let alone masks, she wasn’t too worried.

“I just winged it like everything else she’s given me,” Niebuhr said.

Niebuhr also painted a waterfall backdrop for another play that was canceled. It was repurposed and will be featured in this production.

“The Lion King Jr.” will mark the first time the group has returned to stage without restrictions on attendance since the beginning of the COVID-19 pandemic. The difference for both the performers and the audience will be night and day, said Wegner, noting the reaction of the audience fuels her cast.

“The kids feed off of it — and they live for it. That’s like the whole purpose of theater. It’s interactive,” Wegner said. “If you are a good, responsive audience, the kids are going to feed off that energy and they are going to give it their all.”

USC Senior Merideth Klingbeil, a veteran of the USC stage, agreed. She said the only time she can see the reactions from the crowd beyond the front row is when they are allowed to take to the aisles of the theater during their performance.

Klingbeil said she’s looking forward to it, especially after being pulled from the school’s production of “High School Musical” just hours before she was set to perform because she had to go into quarantine.

Nick Schindler, also a senior, will play meerkat Timon. While he has graced the stage before, this was the first play he actually auditioned for.

Wegner admitted Schindler wasn’t on her radar for the part, but he had been roped into several other productions when others had become ineligible to play their parts or they needed more people who could sing on stage.

“He auditioned for Timon, and I could tell he wanted it,” Wegner said. “He came to play. I couldn’t not give it to him, but he’s been on hand to help usher in the new generation of booth workers too and that’s been really great.”

Schindler had thought about auditioning for the role of Timon before the selection of the play was even announced. As a child he watched “The Lion King” a lot with his family and had already decided that if the school ever tackled the play, he would audition for the role of Timon. Another role he was hopeful to have the opportunity to try out for was the part of Kronk if the theater group ever decided to do Disney’s “Emperor’s New Groove.”

Wegner was happy to help him fulfill one of those roles while he was at USC. She’s also grateful that he, and so many others, have taken the initiative to pass their knowledge onto the younger members of the group.

“The main theme [of ‘The Lion King’] has been the circle of life and it’s really beautiful to watch the leadership that we’ve had with the seniors passing that onto the next generation so this circle can continue,” Wegner said.

Reserved seating ticket sales may be purchased by calling the USC High School Activities Office from 8 a.m. to 4 p.m. Monday through Friday. Tickets are $9 for adults, $8.50 for senior citizens and $8 for students. Family packages for two adults and three or more children can also be purchased for $32.