Allen Borkowski, age 98, of Albert Lea, formally of Kiester, died Friday, December 24, 2021 at St. John’s the Woodlands in Albert Lea, MN. A funeral service will be held 11:00 AM, Friday, December 31, 2021 PM at Our Savior’s Lutheran church in Kiester, MN with Chaplin Don Malinsky officiating. Visitation will be one hour prior to the service at the church on Friday. Interment will be in Our Savior’s Lutheran Cemetery, Kiester, MN with Military Honors accorded by the Kiester American Legion. Bruss-Heitner Funeral Home is assisting the family. Please leave online condolences at www.brussheitner.com. 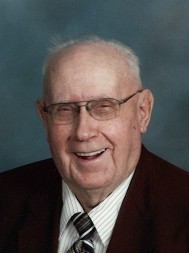 Allen was born December 7, 1923 in Gray, IA, the son of Bert and Clara (Urban) Borkowski and was baptized December 25, 1923. He moved with his parents and brother to Lewisville, MN, in March 1930. Allen joined the U.S Army on December 12, 1944 and served in WWII until his discharge in March 9, 1946. Allen married Gladys Schumaker on October 30, 1960 and to this union two children were born. The family moved to the Bricelyn area in 1967 where they farmed until moving to Kiester. Allen was on the church council for a short time and also served on the Kiester Town Board. He was a proud member of the Kiester American Legion for over 70 years.

He is preceded in death by his parents; brothers Wilbert and Dorvin (Evelyn) Borkowski.