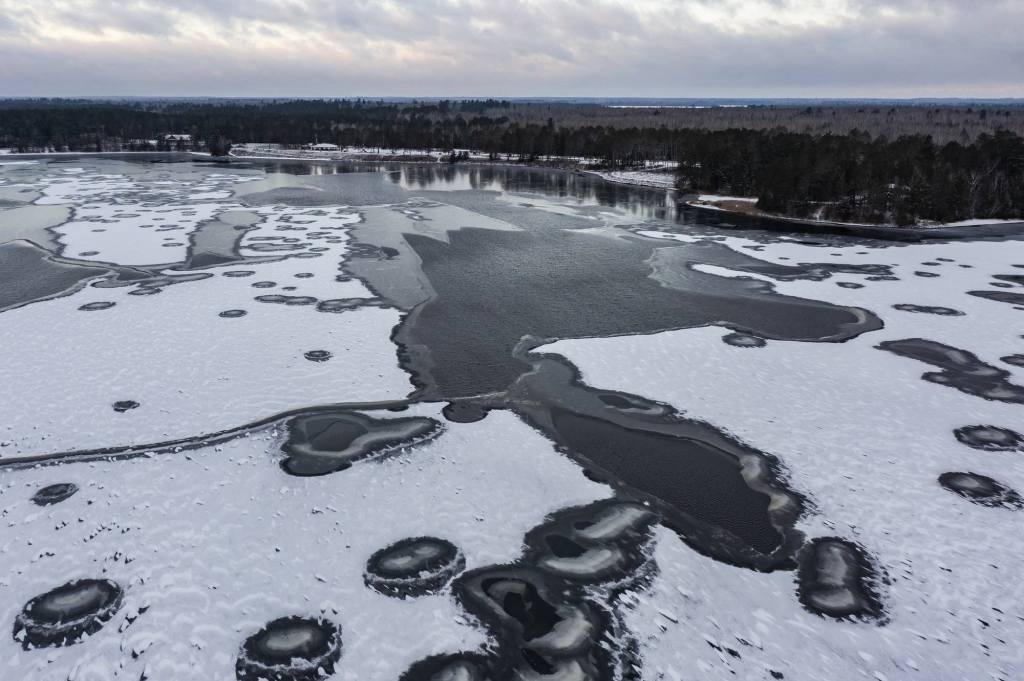 Much of Island Lake in Gnesen Township 18 miles north of Duluth is covered with ice, but there are large portions where the ice is thin, open water is flowing and the ice is pocked with signs of creeping water as seen here on Nov. 30. Derek Montgomery for MPR News

As Minnesota’s lakes warm due to climate change, they are losing ice cover that turns them into playgrounds for the state’s winter-hardy residents.

Data show ice cover on Minnesota lakes has declined an average of 10-14 days over the past 50 years, state environmental officials declared Friday during a news conference on the shore of Medicine Lake in Plymouth.

“In our own backyard, climate change is chipping away at the lake ice season,” said Katrina Kessler, commissioner of the Minnesota Pollution Control Agency.

An ice season shortened by two weeks could have far-reaching impacts on beloved Minnesota traditions such as ice fishing, snowshoeing, snowmobiling and cross-country skiing, and hurt local businesses that depend on winter tourism and recreation, officials said.

“We are already seeing the impact of climate on our Minnesota way of life, which includes our natural resources, our outdoor activities and our economy,” said Sarah Strommen, commissioner of the state Department of Natural Resources.

“We all know Minnesota as the land of 10,000 lakes. It’s the state of hockey, or the state of fishing,” Strommen said. “These unique qualities of our state’s identity face an uncertain future because of warming temperatures and shorter ice seasons. “

State climatologist Pete Boulay is one of the keepers of the extensive records of ice-in and ice-out data for lakes across Minnesota. Much of the data has been collected by volunteers who have lived on the lakes.

“We’ve gone to people’s houses where they’ve had dates written on cupboards to get the ice-in and ice-out dates,” he said. “So we’re always building the database.”

This year, ice formed on Medicine Lake on Dec. 7, a week later than the median ice-in date of Nov. 30, Boulay said. The lake has lost almost 12 days of ice cover since 1967.

“So right here, we have a real-time witness of what’s going on with the lakes,” he said.

Some lakes in northern Minnesota have seen even greater declines in ice cover. Lake Bemidji has lost nearly 19 days in the last half-century.

Winter recreation advocates worry that a shorter season with sturdy, stable ice could have negative impacts on their favorite activities.

Michelle Morey is president of Women Anglers of Minnesota, a 1,000-member nonprofit that helps women and children connect with the sport of fishing. It also sponsors fishing workshops and tournaments.

Morey said interest in ice fishing has been growing, in part because ice anglers don’t need a boat. But she said recent warm and slushy ice seasons on lakes in southern Minnesota pose a safety risk.

“Ice anglers must be even more aware of changing conditions, particularly those anglers with wheelhouses or ATVs that are at a greater risk for going through the ice or getting stuck on slushy lakes,” Morey said.

Besides recreation, warmer water and a shortened ice season also can have an impact on a lake’s ecosystem, leading to more toxic algae blooms and invasive species, while causing fish populations to shift. Walleye, for example, prefer colder water, and no longer thrive in warmer lakes, Strommen said.

The effects on lake ice are an indicator of the changes happening with the state’s climate, Kessler said. Minnesota winters, in particular, are warming faster than its summers, she said.

“What we are putting in the air is affecting our waters,” Kessler said. “Releasing greenhouse gases from burning fossil fuels for transportation and generating electricity, for example, is changing our climate.”

Lake ice changes are also a good way to measure the impacts of climate change because they’re not as variable as weather conditions, which can be influenced by El Niño or other patterns, said John Magnuson, professor emeritus at the University of Wisconsin-Madison’s Center for Limnology. Magnuson was not involved in Friday’s event, but has extensively studied lake ice changes.

Also, lakes are scattered across not only wilderness areas, but also in cities where people have lived around and interacted with them for years, Magnuson said.

There are detailed records of the ice-in and ice-out dates for lakes across the Northern Hemisphere going back centuries. That’s because in Minnesota and other places in the world, lake ice played an important role. People harvested it for food preservation, or used it as a method of travel, Magnuson said.

“When the lake would freeze, all of the sudden you had a transportation corridor available to you to get to the other side of the lake, or to get to a city that you hadn’t been to for some time, or a neighbor or relative,” he said.

On lakes across the Northern Hemisphere, Magnuson’s research found a similar trend of ice loss.

Less ice cover could cause physical and ecological changes in a lake, Magnuson said. Ice and snow reduce the amount of light that can penetrate to the water below, which affects how productive plants and algae are.

It also could change patterns of thermal stratification — when lakes separate into different layers of density after the sun warms the surface — and the natural mixing or turnover that occurs in the spring and fall. That process is important for distributing oxygen that living organisms need to survive.

In Minnesota, where winters are long, the use of lake ice plays an important cultural role and is tied to people’s sense of place, Knoll said.

“As we have less really reliable lake ice, there’s going to be a loss to the ways we use it — for cultural or social or even the economic benefits we gain from it,” she said.

In 2019, Knoll authored a study examining the impact of shorter ice seasons on cultural traditions and recreation. Those included ice fishing in Minnesota, ice skating races in Sweden and Shinto religious ceremonies on frozen lakes in Japan.

Minnesota has nearly 100 ice fishing tournaments across the state every year, Knoll said. Those events bring a lot of people to local communities in the winter season, when tourism otherwise tends to be slow, she said.

For the many businesses that rely on frozen lakes, including resorts, ice fishing outfitters and snowmobile rental companies, a lack of predictable ice can be problematic.

At Trapper’s Landing Lodge on Leech Lake in Walker, the winter season is getting busier with the growing popularity of ice fishing, manager Josh Bullivant said.

“Even though people say it’s a shorter ice season, the industry as a whole is the fastest growing outdoor sport there is,” Bullivant said.

Trapper’s Lodge has onshore cabins and a restaurant and also rents fishing gear and luxurious sleeper ice houses with leather couches and TVs. While most visitors come for the weekend, some stay for a full week to fish for walleyes, northern pike and perch.

Bullivant said the ice conditions on Leech Lake vary from year to year. Last year, ice covered the lake for seven months, he said, but this year, it’s been forming a bit later than usual.

While Bullivant said he doesn’t have enough data to know whether the temperature changes are caused by climate change, he believes it’s a factor.

“There’s definitely something in just the extremes,” he said. “Now all of a sudden, it’s going to be cold, and we’ll get a super amount of ice. And then all of a sudden it’s 80 degrees, and it’s all gone in a day in March.”