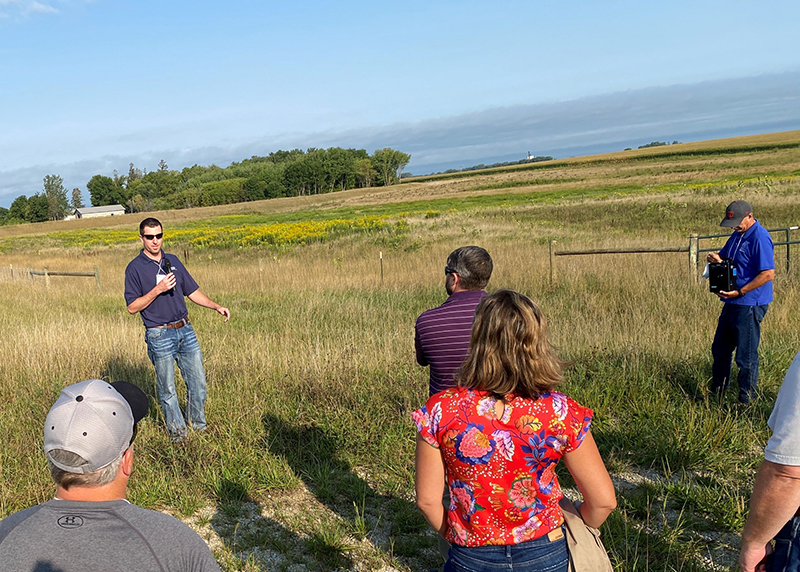 Cody Fox, project manager for Cedar River Watershed District, speaks Aug. 25 at an upland, stormwater storage site in Mower County as part of a tour by board members of the Minnesota Board of Water and Soil Resources, a state agency. On Dec. 2, BWSR executive director John Jaschke honored Fox with the 2021 Outstanding Watershed District Employee award during the Minnesota Association of Watershed Districts’ annual conference. Provided

Cody Fox has led the nearly $7 million construction of those 14 structures the past six years as the Cedar River Watershed District’s project manager, which has involved extensive efforts to target project sites that offer the greatest environmental and financial value. Fox has forged relationships with private landowners to earn their trust and cooperation to build earthen berms that temporarily capture large amounts of stormwater and snowmelt.

For his work, Fox was honored earlier this month as the 2021 Outstanding Watershed District Employee of the Year during a virtual version of the Minnesota Association of Watershed Districts (MAWD) annual conference.

John Jaschke, executive director of the Minnesota Board of Water & Soil Resources (BWSR), announced the award, using Fox as an example of local staff being a “driving force behind conservation delivery in Minnesota.”

“Cody Fox’s dedication to preserving our water resources is commendable,” Jaschke said, “and we appreciate all he does to protect and improve water quality in the CRWD.”

Fox has worked 10 years for CRWD, with the past six years mainly focused on the district’s Capital Improvement Plan (CIP) for upland stormwater storage, which is an ongoing initiative started in 2016 thanks to a $3.2 million grant from The Hormel Foundation. CRWD has used the grant to leverage more than that in matching funds, mostly from the state.

Fox understands the most important part of working with the public to do shared projects, CRWD administrator Justin Hanson said.

“Our project landowners and farmers sum up Cody’s character with one simple but powerful statement: ‘He does what he says he’s going to do,’” Hanson said. “We have completed our project plans on time and on budget while exceeding our ambitious goals. This all couldn’t have been done with his passion and credibility.”

In leading the CIP initiative, Fox has worked with landowners and consulting engineers to build the water-storage projects, mostly in the Dobbins Creek subwatershed upstream from the city of Austin. Nearly 3,000 acres overall now are controlled by CIP projects in the Dobbins watershed prone to flash flooding.

When implementation began in early 2021 on the Cedar River Comprehensive Management Plan (created through BWSR’s One Watershed, One Plan program), Fox started directing projects by securing funding, developing agreements and overseeing construction. During his career, Fox has led the construction of numerous grass waterways, water-and-sediment control basins and other conservation projects in rural areas of Mower County.

“Cody has a unique skill set that combines high-end technical skills with outstanding people skills and a superb work ethic,” said Dave Copeland, a BWSR board conservationist who works frequently with Fox. “He specializes in connecting with landowners and understanding how their personal and business goals fit with conservation opportunities.”

Upland storage decreases the amount and speed of stormwater, reducing the potential for major streambank erosion.

In 2020, CRWD celebrated surpassing its five-year goal for the CIP initiative by achieving at least a 10-percent peak flow reduction at the Cedar River-Dobbins Creek point in Austin. This came after the completion of CRWD’s biggest project to date — Dexter 30-Dam 2. Spanning nearly 2,000 feet long with a peak berm height of 21 feet, the $1.2 million structure in Dexter Township provides temporary storage of stormwater in the headwaters of Dobbins Creek’s south branch.

When the area gets about 8 inches of rain over 24 hours — roughly what’s considered a “100-year flood” — the Dexter 30 berms will temporarily hold stormwater covering nearly 100 acres or about 2.5 times the acreage of Austin’s East Side Lake. At capacity, stormwater will cover about 120 acres with enough water to fill a 550-foot-deep pool the size of a football field.

With all CIP projects in place, a 10-year rain storm (roughly 4 inches of rain) — which leads to some rural roads being overtopped by flooding — would be about 1 foot lower at its peak in Dobbins Creek near the Jay C. Hormel Nature Center.

Through CIP projects, much of the sediment, excess nutrients and other pollutants in stormwater can settle to the bottom of the basin created behind the CIP berms rather than continue into Dobbins Creek and the Cedar River.

Fox lives in Albert Lea with his wife, Kelsey (a teacher for Albert Lea Public Schools), and their children, Levi, 4, and Savannah, 1.

He also is a part-time firefighter for the Albert Lea Fire Department and does side work as the Freeborn County ditch inspector. His work for CRWD also has led him to help with conservation projects in Freeborn County within the Cedar River watershed.