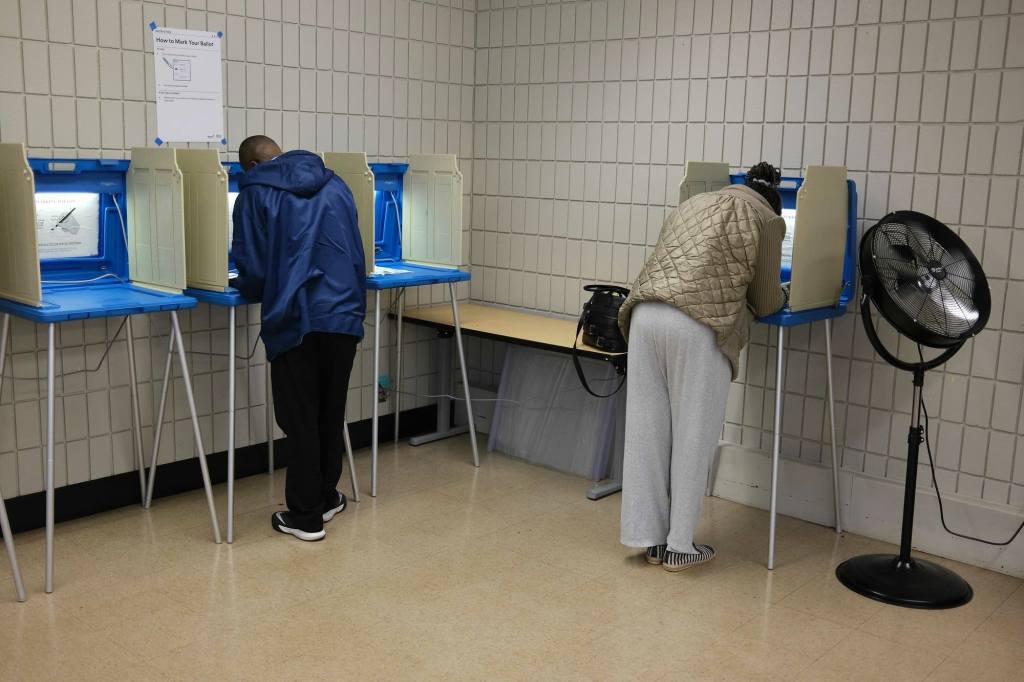 Residents vote in local elections at the Phyllis Wheatley Community Center in the Near North neighborhood of Minneapolis Nov. 2. Tim Evans/MPR News file

The typical way new political districts are drawn every 10 years in Minnesota is that the courts do it. It’s happened that way for decades, mostly because Legislatures and governors haven’t been able to agree on plans and pass them into law. But that doesn’t mean they don’t try, and that’s what’s going on in the Minnesota House now.

“I described it as being highly partisan,” Torkelson said of the DFL plan. “And our analysis and other people’s analysis of the map indicates that, based on the pairings and other issues.”

Why is that important? Because if such a map became law, the paired lawmakers would have to either compete to be a candidate next year, move to another district, or one lawmaker would have to step aside.

House Republicans have drawn their own redistricting plan with 15 House pairings and 13 Senate pairings. They plan to present it as a proposed replacement during a committee hearing scheduled later this week.

Torkelson described the Republican proposal as an opposite reaction to the DFL map.

“To try and redistrict a small part of the state on an existing map is really hard to do, because as soon as you change one district, it ripples out across the entire map,” Torkelson said. “So, it’s much more practical to present an entire statewide map.”

Lawmakers are working to pass a redistricting plan by mid-February. If they can’t do it by then, the courts take over the job.

The redistricting committee in the Republican-controlled Minnesota Senate has yet to announce its own proposal. A court-appointed panel of judges is also working separately to come up with new political boundaries to get a jump on the February deadline.

House Republicans stress that their proposal would divide far fewer counties and cities than the DFL plan. Those divisions were a frequent complaint during a pair of public hearings last week.

Leland Rogness, the chair of the Otter Tail County Board of Commissioners, told lawmakers that he has concerns about the DFL plan because it would split his county into two state senate districts.

“We feel that Otter Tail’s voice would be diminished significantly in this scenario,” Rogness said. “These legislators would need to follow the county agendas and priorities of so many counties that no county in these districts would have a clear representation.”

Angie Hanson, a resident of Albert Lea, also shared concerns about the impact of the DFL map.

“The proposed lines would break this community apart,” Hanson said. “I feel that Freeborn County and Albert Lea Area Schools specifically will be best represented by the same representative. We share one representative.”

The House panel established a set of redistricting principles before the map drawing began. Those principles include things such as equal population, preservation of communities of interest, the preservation of equal opportunity for racial minorities and creating compact and contiguous districts.

Rep. Mary Murphy, DFL-Hermantown, who chairs the Redistricting Committee, called the House DFL plan the “people’s map,” because it was based on those principles as well as public input.

“We are empowering the voters by the maps that we adopt,” Murphy said. “We are open and honest in our sincerity to deliver.”