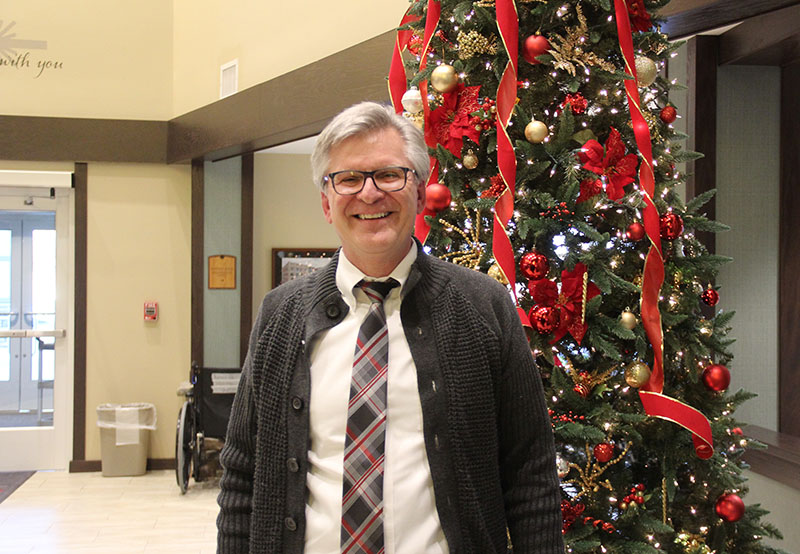 Scot Spates started as CEO of St. John's Lutheran Community in 2005. He will retire in the beginning of January. Sarah Stultz/Albert Lea Tribune

After 16 years as CEO and administrator at St. John’s Lutheran Community, Scot Spates is retiring at the beginning of January to begin a new chapter of life.

When Spates started in his position in May 2005, there was only the original campus of St. John’s Lutheran Community off of Minnesota Highway 13. But through the years, he, along with dedicated board members and other staff, helped transform the senior care organization’s footprint in Albert Lea and usher in a second campus off of Fountain Lake.

Spates said at first when he arrived, there were plans to remodel the original site, but with the cost nearing $8 million to $10 million, the thought came up why not build new.

In 2009, the board started strategic planning. That process identified assisted living services as something St. John’s needed to offer, and they also discovered they needed to start looking at a different model where all people would have their own rooms and bathrooms, instead of having shared rooms with shared bathrooms.

He said the board decided it  wanted to offer a full range of services at one location and also recognized that a lot of their business was for short-stay residents who were recovering from surgeries. The new site would offer short-term stay, permanent nursing home residents, assisted living and independent living, and memory care would be provided in the assisted living setting.

In 2010, the board began looking for property, and he recalled it was Orv Simonsen who ultimately suggested looking into the former Albert Lea Country Club property.

St. John’s ultimately bought half of the land for the new campus, which Spates said was the best possible location.

He remembers the board meeting when the location was decided, and remembered how good he felt about that decision after the meeting closed that day with the Lord’s Prayer.

“That was almost the most emotional decision,” he said.

In 2011, they started working with an architect, financial consultants, the city and lenders and then began working on permissions to build the nursing home.

He recalled the time commitment of the local people on the building committee who spent hours in meetings over the project.

The contractor ultimately started footings for the assisted living in 2015 and about a year and a half later the first tenant moved in. After that, the independent living apartments opened in 2016, followed by the nursing home in 2018.

It was a nine-year span from start to finish, and Spates credited the capital campaign committee, which he said was instrumental in raising money for the town center, which joins all of the buildings together.

After that was complete, he remembers the open house, which he said was larger than he had ever expected with wall-to-wall people.

“For everyone in the process, it was just beyond our expectations,” he said.

Aside from the building project, Spates undoubtedly will remember his time at St. John’s as being associated with the first 20 months of the COVID-19 pandemic.

He said the hardest part for him was the first half of the first year when restrictions were tight and visitors were not allowed into the facility.

He said he has been proud the organization did not have a severe outbreak like many other nursing homes did where many residents died, and he credited the staff who have been extra careful about infection control and self-monitoring their symptoms.

“Our staff has just done fantastic,” Spates said. “There’s very few senior campuses in Minnesota that have done as well as we have. It’s the staff who get credit for that.”

Deb Kenison, St. John’s board member, said Spates has been a compassionate and modest leader in his time with the organization.

“You can tell he cares a lot about his staff and residents,” she said.

She said the organization had its annual meeting earlier this month, and Spates talked about how impressed he has been with the residents and their stories. He was also proud of the staff and recognized how much they have gone through during the pandemic.

“Having two nursing homes is a challenge, and he’s handled it well,” she said.

Spates said his last day will be Jan. 3 or 4, and he and his wife, Anne Marie, plan to move to Garrison, where they will be closer to their children and grandchildren.

An interim administrator will come in for about a month until the new CEO begins in February.