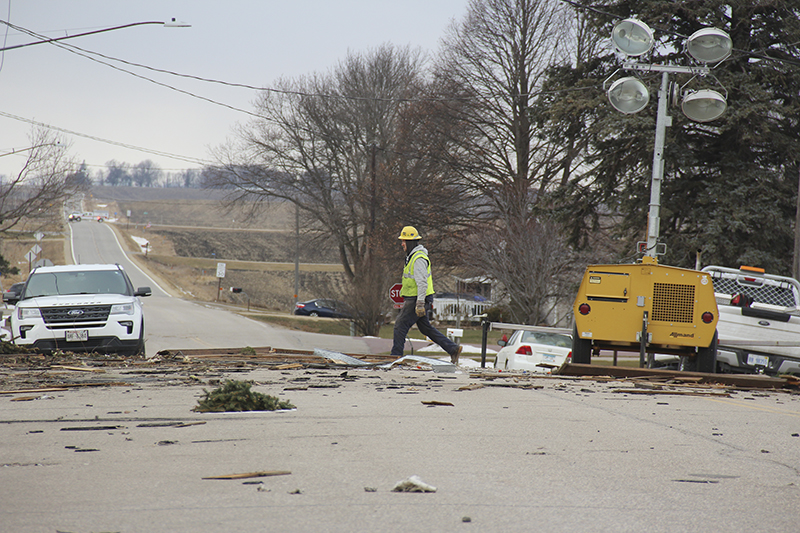 The streets were littered with debris Thursday morning in Hartland. The city had one of six tornadoes in the county. Sarah Stultz/Albert Lea Tribune

The Freeborn County Board of Commissioners on Tuesday declared a local disaster from the severe storms Wednesday night.

The National Weather Service on Monday confirmed three new tornadoes in the county, bringing the total to six.

Freeborn County Administrator Tom Jensen said the local disaster declaration allows the county to ask the state of Minnesota for public infrastructure funds for storm cleanup. He said the threshold is $663,000 in damages, and presently there is well over $400,000 in estimated damage.

The new tornadoes confirmed were an EF-0 near Hayward, and two EF-1 tornadoes, one near both Myrtle and London.

The London tornado was on the ground for 4.5 miles and moved to the north with a large machine shed destroyed.

Two previous EF-1 tornadoes were reported in rural Alden and one EF-2 in Hartland. The fast-moving Hartland tornado reached wind speeds as high as 115 mph and was 55 yards wide. It damaged numerous buildings, trees and utility poles, with significant damage coming in the center of town to both residential and business structures. The tornado dissipated to the northeast in a field, a total of 2.17 miles from where it started.

Look for more information as it becomes available.