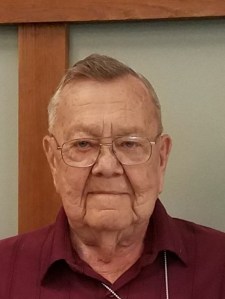 He was born on July 22, 1933, to Truman and Gladys (Rasmussen) Gunderson and lived his entire life in the Freeborn County area. Wayne graduated from Albert Lea High School, where he was active in the band and FFA. He was a hired hand on a nearby farm for a time, then accompanied his employer to Colorado Springs to help build a motel. His favorite memory of that time was driving alone to the top of Pike’s Peak, just for the view.

In 1952, Wayne enlisted in the United States Navy during the Korean War, one day shy of his 19th birthday. He attended submarine school at Naval Submarine Base – New London in Groton, CT. Following training, he served most of his 4 years in the Mediterranean Sea aboard the submarine USS Conger (SS-477) with his final assignment as Fire Control Technician – 2nd Class aboard the submarine tender USS Fulton (AS-11). He was awarded the National Defense Service Medal and Good Conduct Medal.

After his time in the Navy, he married Shirley (Brabec) in 1958 at First Presbyterian Church in Albert Lea,, where they remained lifelong members. They have one daughter, Patricia Ann.

Wayne was first employed at Universal, then became a press operator at Church Offset Printing in 1965 and was eventually promoted to salesman. He was a member of the Eagles Club and the Elks Lodge, and was a 51-year member of American Legion-Post 56.

Wayne was a true outdoorsman and his adventurous spirit was always an inspiration to his family! Hunting and fishing were Wayne’s favorite hobbies, especially deer hunting and trout fishing. He earned several awards as a competitive rifleman with the NRA. Traveling was a great passion that he shared with his wife, Shirley. They traveled to 49 states and visited Canada, Mexico, Alaska, and eastern Europe. If you knew him, you knew his love for camping! He and Shirley spent many happy years as members of the Crossroads Camping Club.