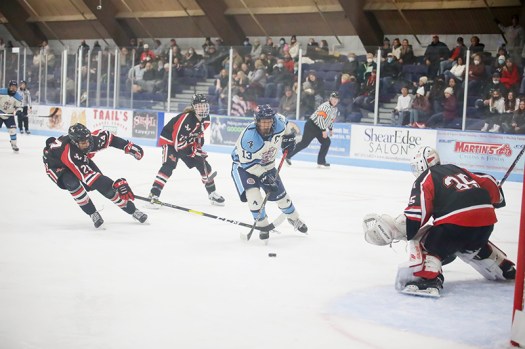 Albert Lea’s Joseph Yoon prepares to shoot the puck toward the goal Saturday in the game against John Marshall. Yoon scored two goals during the game, and the Tigers won 4-1. Kelly Hendrickson/for the Tribune 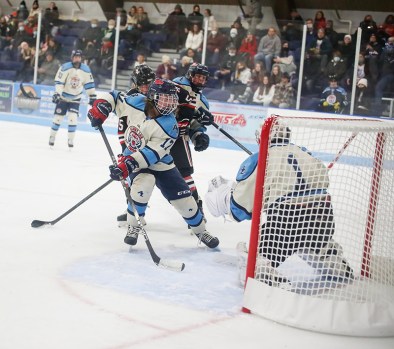 Boys’ team improves to 12-3 with win over JM

The Tigers got on the board early and used two third-period goals from junior Joseph Yoon to pull away, beating the Rockets 4-1.

It didn’t take long for senior Jared Turrubiartes to give the Tigers the lead when he scored a power-play goal assisted by Yoon and junior Tim Chalmers less than four minutes into play.

Chalmers scored an unassisted goal of his own in the closing minutes of the first period, giving the Tigers a 2-0 lead heading into the break.

Junior Dakota Jahnke was in goal for Albert Lea and saved 10 shots in the opening period.

The second period was quiet by both teams. The Tigers put 10 shots on goal in the period, compared to six from the Rockets, but none of them found the mark.

John Marshall cut into the lead in the seventh minute of the third period to make the score 2-1 in favor of Albert Lea. However, just over two minutes later, Yoon scored an unassisted goal then put the game on ice in the 13th minute, scoring another unassisted goal.

Jahnke saved a total of 27 shots on goal.

The Tigers move to 12-3 this season and will be back on the ice Thursday when they take on Northfield on the road.