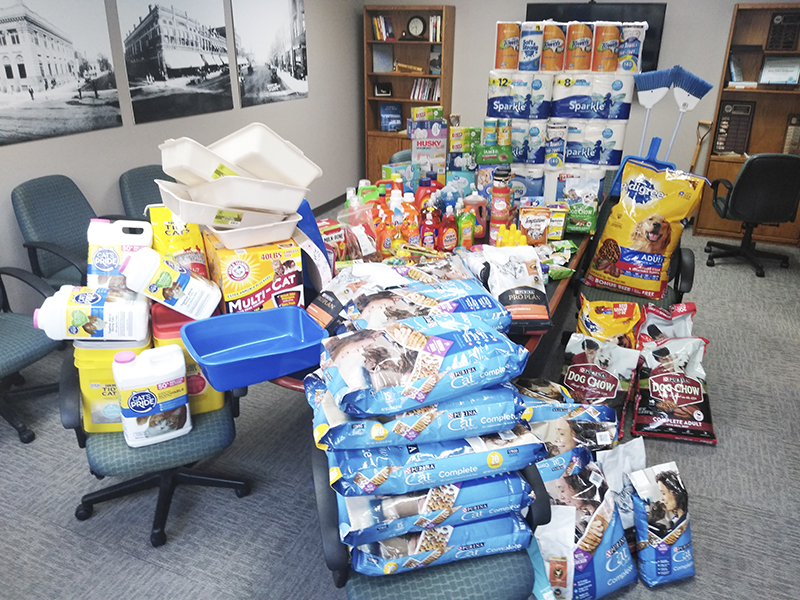 Items were collected for the pet supply drive, which was held over three weeks in December, to benefit the Freeborn County Humane Society Animal Shelter. Provided.

The Albert Lea Convention and Visitors Bureau recently wrapped up a three-week pet supply drive to  benefit the Freeborn County Humane Society. The drive was in response to an  article in the Albert Lea Tribune newspaper where they spelled out the challenges the shelter was  facing with a “full-house,” supply needs and volunteer shortages, a press release stated.

The drive began at the CVB office with a goal of filling three large boxes of cat/dog food,  treats, cat litter and cleaning supplies. People could stop in at their convenience and drop off  supplies. On Dec. 3 there were large, costumed characters  outside in front of the CVB greeting people and offering drive-up  donation service.

At the end of the first week, one full box of supplies and a few cash donations had been given. The second  week was a little slower, but by the end of the third week, it was only a half a box away from meeting the goal.

The event culminated with a grand finale celebration at Edgewater Bay Pavilion featuring music from “The DJ” Dalton Janssen, hot food from The Yankee Catering, fresh baked goodies  from BG’s Sweet Treats and several drawings to give away door prizes sponsored by  Freeborn-Mower Electric Cooperative, Albert Lea Convention and Visitors Bureau, Daisy Blue, Freeborn  County Humane Society, The Pet Authority, Albert Lea-Freeborn County Chamber of Commerce, The Seed House and Homestead Boutique. Another full box of supplies and some  monetary donations were given at that event.

Talk is already underway for another event in 2022 with hopes of a bigger grand finale event  that will be downtown, outside, during the warmer months.