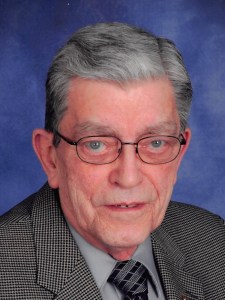 Art was born at home on July 31, 1939 to Arthur W. and Veona A. (Oleson) Smith. He grew up in the Pine City Area and was active in many school events. He played drums in concert, marching, and dance band. He won 1st place for a drum solo at the state music contest.

On September 16, 1961, he was united in marriage to Jaris L. Kelly in Glencoe at 1st Congregational Church.

Art served in the Navy Reserve from 1957-1962. He served on active duty in the regular Navy from 1962-1966. During his military service, he served on aircraft carriers and submarines, and was executive officer on a mine sweeper. He spent one year in Saudi Arabia training the Royal Saudi Navy.

In 1966, the family moved to Albert Lea. He worked at Jones, Haugh and Smith Inc. for 35 years. He was City Engineer for many local communities. Art was registered as a Professional Engineer in six states, and a contract state building inspector. He was active with Boy Scouts, was a Cub Scout leader, and coached youth at the “Y”.

Art served on the Civic Music Board, County Board of Appeals, community band, 4-H, County Planning Commission, Meyers Art Services Board, and the Habitat for Humanity Board. He was a member of United Methodist Church, serving on many committees, including as an usher, Chairman of Board of Trustees, choir, and handbell choir, and Finance Committee. He was a member of the American Legion Post 56, the American Society of Civil Engineers, and Rotary (Paul Harris Fellow).

Art retired in 2000. During this time, he enjoyed traveling to places like Alexandria, Baudette, Ely, and Canada. He took many cruises to places like Alaska, Hawaii, Sweden, and the Panama Canal. He enjoyed bowling and fishing, spending time with his grandson, and eating at Semcac.

He was preceded in death by his wife, Jaris; son, Jim; parents; and brother-in-law, Lowell.

A Celebration of Life will be held at 11:00 a.m. on Friday, February 4, 2022 at United Methodist Church in Albert Lea with Pastor John Mitchem officiating. Time for visitation will take place one hour prior to services. Military honors will be provided by the Albert Lea Area Veterans. Burial will be held at a later date. Masks are required for attendance.

Memorials can be made to the United Methodist Church, The American Legion Post 56, or donor’s choice.

Services will be livestreamed through United Methodist Church and can also be viewed on Art’s obituary page at www.bonnerupfuneralservice.com.