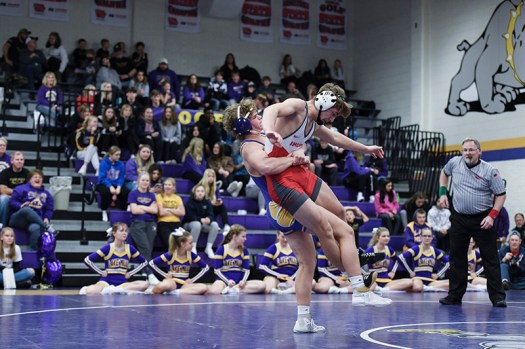 Lake Mills wrestler Beau Kaufman takes on an opponent from Forest City during a match Thursday night at home. Lory Groe/for the Tribune 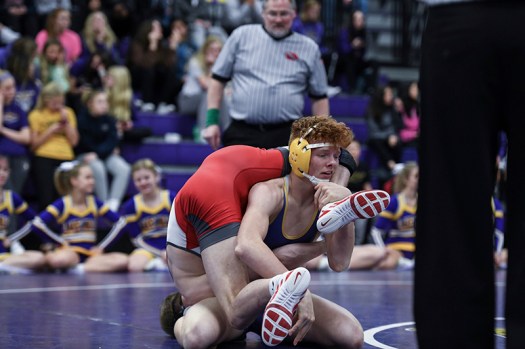 Hayden Brua of Lake Mills takes on an opponent from Forest City. Lory Groe/for the Tribune

LAKE MILLS — Lake Mills wrestlers hosted their first home meet of the season Thursday and was able to get three wins against Top of Iowa Conference opponents.

In the first dual of the evening, the Bulldogs coasted against a very shorthanded West Fork squad, 76-6.

In the second meet of the night, the team did not wrestle their best against North Butler-Clarksville but still came away with a 42-36 win.

“Things did not go as well as we expected against North Butler-Clarksville,” said coach Alex Brandenburg. “That being said, some kids stepped up and helped us to a victory.”

In the final dual of the night, Lake Mills faced off against rival Forest City.

The lead went back and forth throughout, and the teams were in a 30-30 gridlock with four bouts remaining.

However, the Lake Mills squad finished out strong, winning three of the four to come away with a 45-33 victory.

“Our team wrestled much better in the final dual than the middle one,” Brandenburg said. “We wrestled much smarter as a team, and it was exciting to beat our biggest rival.”

The following wrestlers finished the night a perfect 3-0: Lucas Oldenkamp, Garrett Ham, Alex Beaty, and Beau Kaufman. The team improved to 13-7 on the season.