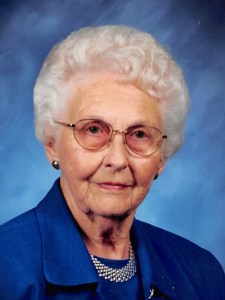 She was born August 18, 1921 to Norman and Clara Johnson in Riceland Township, Minnesota.

Elinor graduated from Albert Lea High School in 1938, then worked as a clerk at the telephone company while in Lerdal, going on to work for Interstate Power in Albert Lea.

She married Lawrence Stotts on February 1, 1941 and together raised two sons in Hayward, Minnesota.

While living in Hayward she was very active at the Hayward Lutheran Church. She worked as a clerk for Esses Grocery and then for District 241 Hayward School Cafeteria.

Elinor was very proud of her Norwegian heritage & family. She made a lot of lefse for the holidays and was happy to teach her family how to make lefse.

She is survived by her two sons, Rex (Lois) Stotts of Albert Lea and Stuart Stotts of Badger, MN.

We would like to give a special Thank you to St John’s Knutson Place staff, Roxie and Sandy. Also to third Floor at St John’s Woodlands staff. Their compassion and care was greatly appreciated by the family.

Memorial services will be held at a later date. Bonnerup Funeral Service is assisting the family. www.BonnerupFuneralService.com