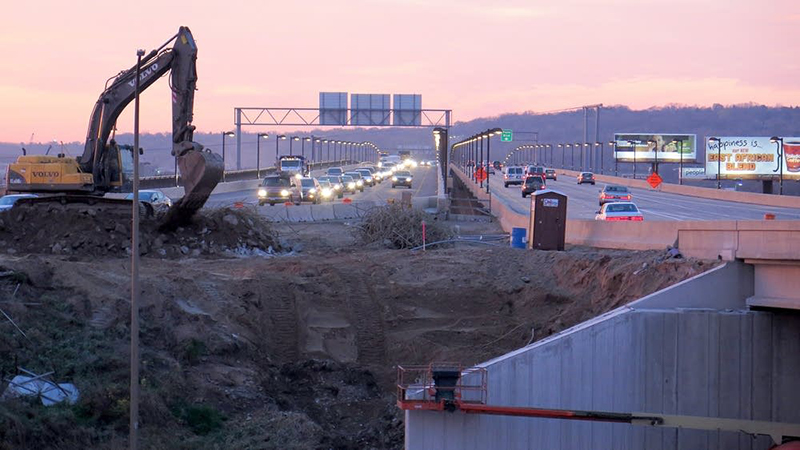 Construction is underway on the Lafayette Bridge in St. Paul over the Mississippi River in 2015. The four-year project replaced one of the state's most worrisome bridges. Tim Nelson/MPR News 2015

Bridges around Minnesota will undergo repairs with a $60 million boost in federal transportation money headed this way and more in the years ahead.

Federal highway officials released the first award amounts Friday that will come from newly approved infrastructure spending. The money will go toward fixing or replacing state and local bridges.

U.S. Sen. Amy Klobuchar said in a press conference that the infusion will make a difference.

“I think no state knows better than Minnesota how important it is to have safe and reliable bridges,” she said. “I remember the cracks in their broken transportation system became tragically clear on August 1, 2007, when the 35W bridge collapsed in the middle of the Mississippi River.”

State Transportation officials say they’ll work with local leaders and Minnesota legislators to decide how best to use the money.

Projects could range from redesigning approach lanes, redecking or resurfacing aging bridges to replacing them all together.

Minnesota has more than 20,000 bridges of 10 feet or longer, with more than 600 listed in poor condition. Most bridges are part of the local highway system.

Minnesota Transportation Commissioner Margaret Anderson Kelliher said final decisions on where the money will go have yet to be made. But she said there is no shortage of need.

“We have Highway 61 over the Pigeon River up in northeastern Minnesota. It’s a border bridge with Ontario and that project is coming up in 2023. We have four bridges on I-94 in Douglas County. This project is going to be open for bidding in 2023. And we believe that this funding could be helpful in that project as well,” Kelliher said as she ticked through the possibilities. “The Dunwoody bridges in Minneapolis need to be redone soon.”

Much of the money will require a state match of 20 percent of the cost. That will be part of bills debated in the legislative session.

Kelliher said the push for state money will involve the Legislature in decisions about how these and other infrastructure dollars get spent. “This is not a lone MnDOT question,” she said.

Locally maintained bridges could be exempt from the matching requirement, under new guidance from the Federal Highway Administration.