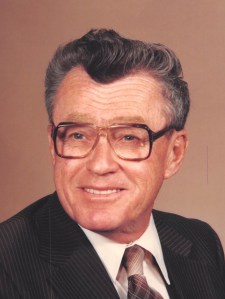 Lawrence was born to Frank and Ella (Nason) Klukow in Albert Lea on August 5, 1929. He attended school through the 9th grade. He then went to work at the local creamery as an apprentice and worked on the farm. At age 21, he joined the United States Navy and was enlisted in the Naval Construction Force, also known as the “Seabees”. As a Seabee, he was stationed in the Philippines and helped construct the Subic Bay air base.

After his time in the Navy, Lawrence went back to farming. He later branched out into a variety of different business ventures, including a used car dealership, Discount Liquidator used furniture, and real estate broker.

On August 28, 1960, he married the love of his life, Marjorie Reyerson, and the two raised two daughters. The family lived in Hollandale for a few years before relocating to Albert Lea.

Lawrence was a simple man with a love for karaoke, traveling in the motorhome across the country, and dancing. He was a true animal lover (especially dogs), and fondly remembered naming all the cows on his childhood farm. His love of animals was passed on to his children, grandchildren, and great-grandchildren. He will be fondly remembered for his quick one-liners.

Lawrence made friends wherever he went. He was an early riser and would often meet new people to have breakfast with on his travels. He also loved Branson, MO, and after the passing of his wife, bought an acreage and settled into a life there, spending many a night singing karaoke.

Funeral services will be held at 11:00 a.m. on Saturday, January 22, 2022, at Bear Lake Church with Rev. Kristi Mitchell officiating. Time for visitation will begin at 10:00 a.m. Interment will follow at Bear Lake Cemetery. Lunch will be served following the service.