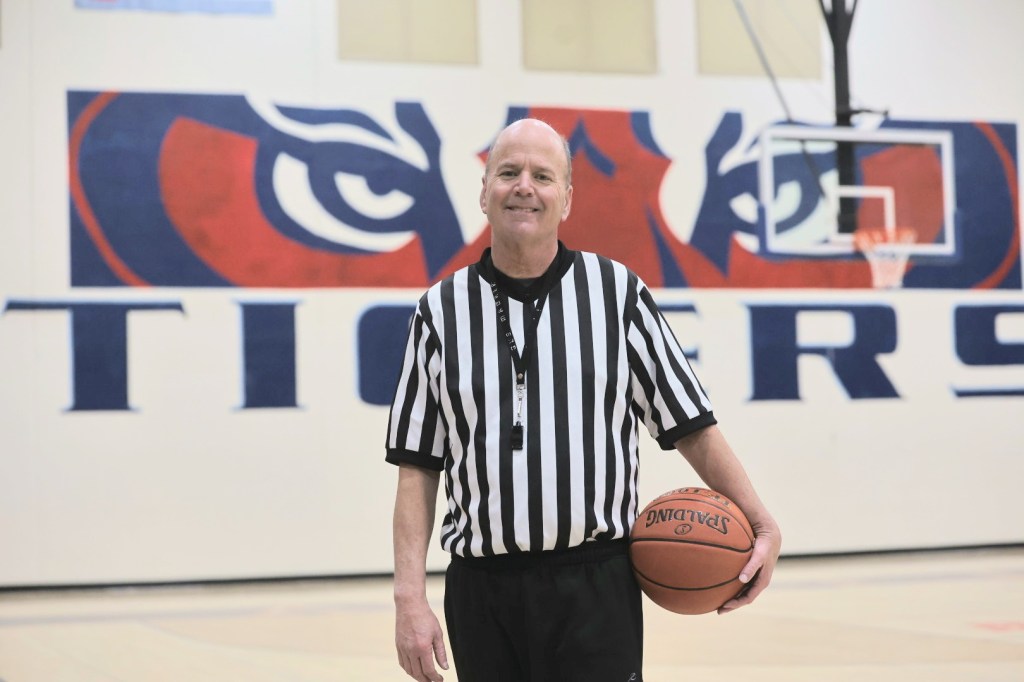 Tom Jones has been a referee since 1985 in the area. Photo courtesy Laura Mae Photography

Official says being a referee has really become a hobby

A longtime Albert Lea referee reached a milestone Saturday when he officiated his 1,000th official winter basketball game since the 2009-10 season.

Tom Jones said he first started refereeing in 1985 after completing college and moving back to Albert Lea. He got asked to coach a traveling basketball team and was involved with the Albert Lea basketball program, and then the school district asked him to start officiating a few ninth-grade games. From there, he said, it evolved, and he has refereed every year since.

“It’s gotten to be a hobby,” Jones said. “I don’t have a gym membership, so this is my working out. So when I start reffing in the fall, I’m usually pretty out of shape, but by like yesterday I did nine straight games over nine hours and was fine. For my age, 59, that’s a good run.”

He credits the group of teachers who were also referees when he first started, who he said “broke him in,” as well as his longtime referee partner John Yost, who he said took him to the next level on the mechanics required to be a good official.

“A person might think you just show up, but there are so many things mechanically that need to be done to be a good official,” Jones said.

Jones said his refereeing slowed down a bit when he was a junior varsity coach for three years in Glenville and four years in Alden, but when his children started getting old enough to play at the Albert Family Y, he started picking up more games.

He presently has 41 games scheduled for January, and February is “jam-packed,” he said.

Though he estimates he has actually officiated many more than 1,000 games, those are the games he has logged after he returned to officiating more regularly in the 2009-10 season.

He said the COVID-19 pandemic is rapidly changing schedules. Add on top of it, many older officials are retiring, and many districts are hurting for referees. He receives calls from all over the region asking him to officiate.

Through the years, he has been involved with numerous basketball programs, including the Harlem Ambassadors and the Vikings traveling basketball team twice.

He has also officiated games that both of his children, Alexis and Spencer, have played in and said he takes them just as seriously as any other player. Both are sophomores and play on the junior varsity team. Alexis also dresses for the varsity team.

He said he hopes he can referee into his 70s like one of his original mentors, Orrie Jirele.

“He reffed into his 70s,” Jones said. “I hope I can continue that basically in his honor. He’s the one who got me started.”

In addition to basketball, Jones said he also officiates some football, baseball and softball games. Basketball is his favorite, though baseball doesn’t fall too far behind.