Patricia Faith Bjerke, 80, passed away on October 17, 2021, at the Medical Center of Aurora, CO after a long illness. She was born in Mason City, IA on February 14, 1941, the eldest of five children born to Gordon and Dovey Marguerite (Elliott) Bjerke. Pat began elementary school in Coulter, IA. Her family relocated to St. Paul, then to Albert Lea, MN and she graduated from Albert Lea High School in 1959. She received her diploma in 1960 from the Johnson Academy of Beauty Culture, Mankato, MN and later attended Metro State University of Denver, as well as continuing-education cosmetology courses. 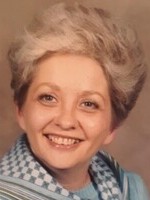 Patricia Bjerke and Dennis Schoenrock married in 1963 at First Lutheran Church in Albert Lea. Dennis’ service in the U.S. Air Force took them from MN to TX, CO and CA. Pat ultimately settled in Denver in 1975 and soon found a like-minded community of friends and supporters at Our Saviors Lutheran Church.

Her long career as a hairdresser began in Albert Lea and continued until just a few years ago. Patricia spent a large span of her career at Hair at Sherman Towers in Denver’s Capitol Hill neighborhood. She was known to kindly make regular house calls to accommodate those who were unable to make the trip to the salon.

In addition to her work as a hairdresser, she found her true calling in serving others, most often through her work with Our Saviors. According to fellow church members, Pat was the heart of Interfaith Hospitality Network (IHN), which began as a day center, and later renamed as Family Promise, a resource for displaced families. Included in the program was a week of overnight housing for families, on a quarterly basis. The amount of organizing was an extensive effort, and Pat coordinated all aspects for nearly 20 years. Over 60 volunteers from OSLC and other churches were often involved. Family and friends knew better than to try to get her attention for anything else during the weeks surrounding that housing week, as it was all-consuming for her.

Over the years she served in various roles at OSLC; as treasurer for the Lydia Circle, on the Benevolence & Advocacy Committee, on the HEART Board at CHARG, a drop-in center at OSLC for people with mental health issues, as an Innkeeper, closing up the church on Sundays, and in so many other ways. Pat was beloved by her church family as a devoted and friendly presence and connector of people; they say when she bid them to do things in her very quiet way, they were compelled to oblige.

Patricia was kind and thoughtful, and an advocate for the underserved. Her empathetic and contemplative nature could be a detriment to her own well-being, and over the years, she struggled with mental and physical health challenges. She maintained a positive outlook, though, and up until the past couple of years, was always up for doing a variety of activities. A lot of enjoyment was experienced dining out, attending the theater, seeing live music, and strolling through the Botanic Gardens. Pat was a baseball and football fan and supported her Colorado and Minnesota teams. She liked Star Trek, mysteries and detective stories, reading, singing, listening to music and doing the crossword and other puzzles.

Patricia’s legacy is the impact she made on the lives of the vulnerable, and on all of us; she is greatly missed.

Interment will take place in Swea City, IA at a later date. Donations in her memory are suggested to Family Promise of Greater Denver, www.familypromiseofgreaterdenver.org