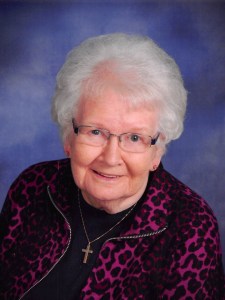 She was born on April 30, 1923, in Ellendale, MN to her parents, Carl and Stella (Nygaard) Baarson. She lived a rich life of almost 99 years, spending many of them on the family farm on which she was raised. She graduated from Ellendale High School as salutatorian of her class. After receiving her teaching degree from Waldorf College, she taught grade school throughout northern Iowa and southern Minnesota up until she met her husband of 52 years, Leighton Truman Langlie. After their marriage on July 9th, 1947, she took up full-time work as a mother, homemaker, and farmer’s wife.

Following the graduation of her four children from high school, she enjoyed working in the physical therapy program at Good Samaritan Society in Albert Lea. Sylvia’s life was shaped by her Lutheran faith. This was evident in her commitment to her church, family, and community. She enjoyed cooking lefse with her seven grandkids, playing with her 14 great grandkids, and attending their sporting events, recitals, and performances.

She is lovingly remembered by her sons, Roger Langlie, and Curtiss Langlie, her daughters, Sharon (Mark) Sorenson, and Mary (Todd) Wayne, her grandchildren, and her great grandchildren. She was preceded in death by her husband, her parents, and her brother Paul Stephon Baarson (Anna Marie). A private funeral service for the family will be held at First Lutheran Church of Ellendale.

Roger, Sharon, and Mary would like to thank Curtiss for his faithfulness to mom these past many years. Well done good and faithful servant. (Matthew 25:23)

Livestreaming will be available on Bonnerup Funeral Home’s website.