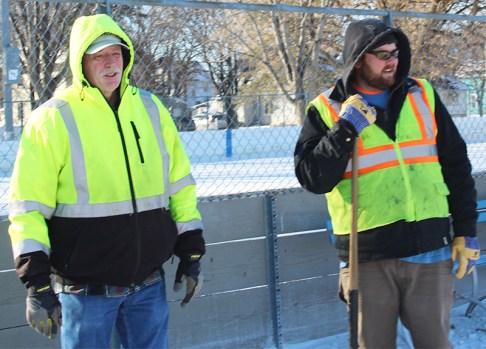 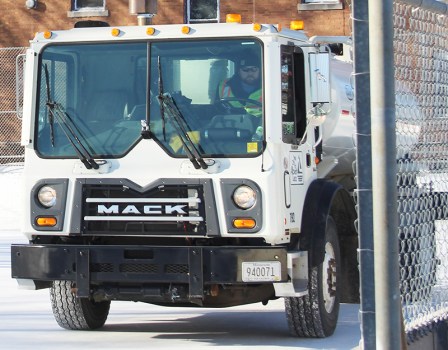 With temperatures consistently below zero, it’s safe to say winter is in full bloom. And with winter comes snow and ice.

Skating is as much a part of Minnesota identity as snowmobiles and Spam. But setting up those ice rinks isn’t as simple as flooding an area and waiting for the spot to freeze over.

Joe Grossman, superintendent of parks for Albert Lea, knows all about the ice-rink process. It’s his job to build them at Academy, Hayek, Lakeview and Hawthorne parks.

“It’s a pretty simple process,” Mike Westney, park foreman, said. “Normally if we have cold-enough weather, we can have stable ice in about a week.”

Creating the rinks begins with having a stretch of cold weather with temperatures in the single digits or below zero, and having 4 to 5 inches of snow helps (by comparison, there is only 1 to 1.5 inches of snow on the ground right now this year).

“Last year we didn’t have that, but we’d make ice faster if we start out with snow on the ground,” he said.

The process starts with packing that snow and compressing it into the ground on a Monday. That compacting removes air. But it’s that night where the magic begins.

“We’ll usually go in at midnight and start flooding the rinks,” he said.

To flood the rinks, a process that takes 10 minutes per rink, they’ll use a flusher truck and pour 2,000 gallons of water.

“It shoots out the back with two fan discharges, sprays,” he said. “You drive around the rink until the truck is empty.”

The whole process — from filling the truck to refilling it — takes roughly 30 minutes.

Because they’ll visit each rink four times, Westney’s work won’t be completed until 8 a.m., which leaves whoever’s next in charge to flood the rink during the day.

And the process will continue every day, though the amount of water added will vary.

“When you’re first starting you empty the trunk,” he said. “You just make your one pass over everything and you’re done.”

Once the rinks are open, it takes three people to maintain them. And at 4 a.m., one person is out there scraping ice. Then another person will sweep away any loose snow, and a third person floods it again.

When the weather turns warmer, he’ll start putting snow on the rink boards to prevent ice from melting. Rink maintenance typically ends in mid- to late-February when the sun starts melting the rink.

“The sun gets too high in the sky and it just heats up along the boards,” he said. “You just can’t keep ice on certain areas of the rink.”

Westney has worked for the parks department for over 20 years, and said every day and every season is different depending on the weather.