An Albert Lea woman was sentenced to up to 10 years of probation and stayed prison time Monday in Freeborn County District for receiving packages in the mail containing methamphetamine concealed in teddy bears. 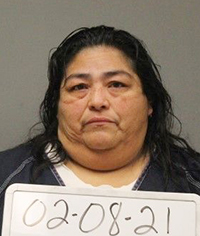 Marivel Ramos, 46, will not have to serve a 48-month prison sentence unless she violates her probation.

Ramos had initially been charged with first-degree methamphetamine possession but the charge was amended to a second-degree controlled substance crime when she pleaded guilty in October.

In court Monday, District Court Judge Ross Leuning said Ramos received a substantial benefit through her negotiated plea deal, and that under the initial charge, she would have seen a mandatory commitment to prison.

“You should not discount how close you were to going to prison,” Leuning said.

Leuning said the case has troubled him a lot, and though it was clear that Ramos wasn’t the major operator of the drug operation in this case — Freeborn County Attorney David Walker said Ramos received the shipments and gave them to another person who then moved the drugs to buyers — she needed to see how significant her actions were.

“If you would sit in this courtroom for just a month, you’d see how damaging methamphetamine is to people in this community,” the judge said.

He referenced types of cases he deals with regularly, as well as children he has had to take away from parents — all because of methamphetamine.

“You should reflect on the ripple effects your behavior had,” he said.

Leuning said in reading the pre-sentence investigation report, it was clear that Ramos understood the seriousness of her actions. Though she was a victim in some ways, he described her as “a voluntary victim.”

“You let them manipulate you into your involvement,” he said.

Though he said he did not think Ramos was a drug user herself, he also ordered a chemical dependency evaluation and ordered Ramos to comply with any recommendations that came out of the evaluation.