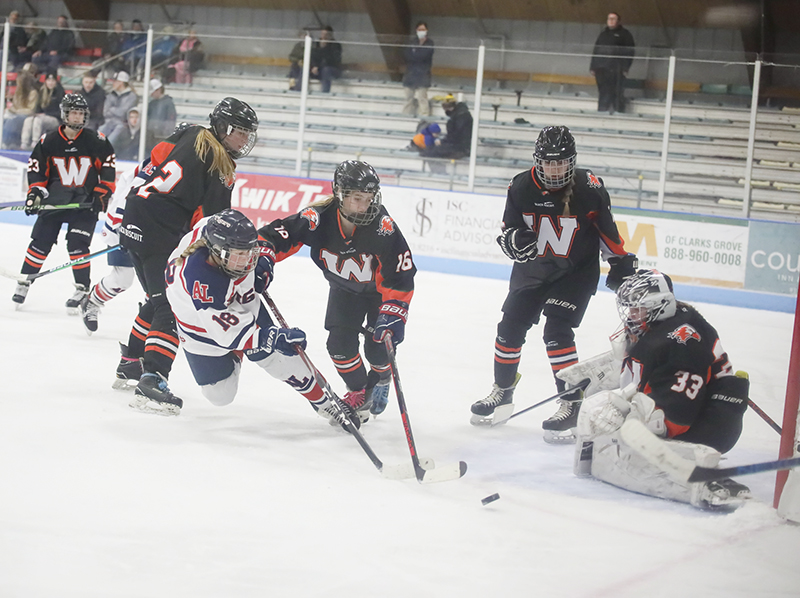 Albert Lea girls hockey player Shelby Evans scored the first goal of the game Saturday against the Winhawks. The girls won 6-0. The girls play again Thursday, and if they win, they will advance to state for the first time. Kelly Hendrickson/for the Tribune

For the second consecutive season, the Albert Lea girls hockey team will play in the Section 1A final for the team’s first appearance at the state tournament.

The Tigers made easy work of the Winhawks Saturday, cruising to a 6-0 semifinal win at home.

Albert Lea jumped out to an early lead and never looked back, scoring three goals in the opening seven minutes of play. Shelby Evans scored the first goal for the Tigers just over one minute into the period. Keira Erickson added a second goal just over a minute later and Mika Cichosz made it 3-0 in the sixth minute of play. Cichosz’s goal was short-handed and all of Albert Lea’s first three goals were unassisted.

Morgan Gosekson scored in the 11th minute to give Albert Lea a comfortable 4-0 lead heading into the first break. Lucy Stay assisted on the goal.

Evans added her second goal of the game in the second period with Goskeson and Olivia Ellsworth in on the assist. Evan scored her third goal in the third period to all but put away the Winhawks.

The Tigers took 50 shots on goal in the game and connected on six of them. Rachel Doppelhammer saved 14 shots in her work at the net for the Tigers.

Albert Lea will take on Austin Thursday night for the right to play in the Minnesota state tournament.