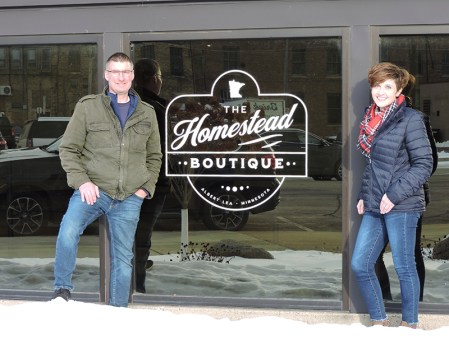 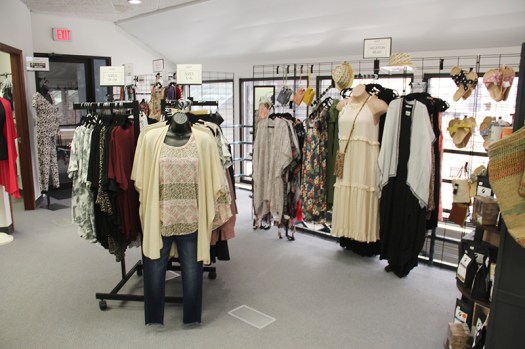 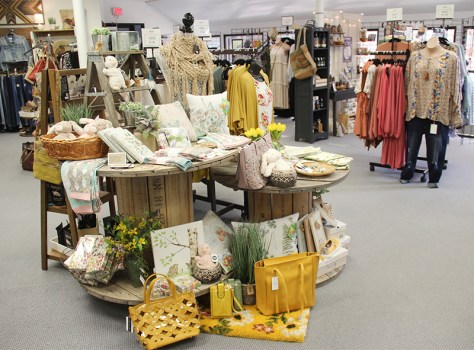 The Homestead Boutique features women's clothing of all sizes as well as seasonal items such as this display with spring-themed purses, pillows and decor. Sarah Stultz/Albert Lea Tribune 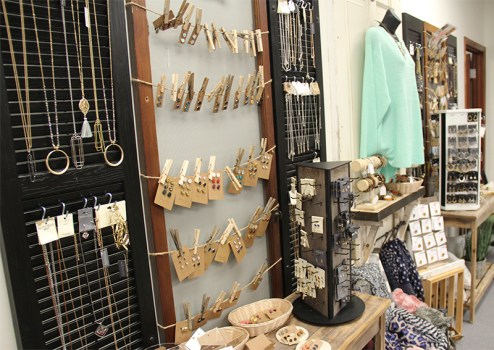 Jewelry from artisans in the area are for sale in the shop. Sarah Stultz/Albert Lea Tribune 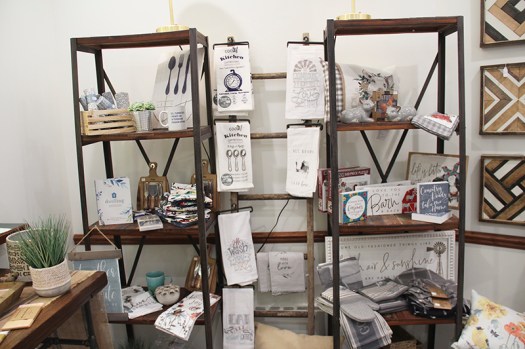 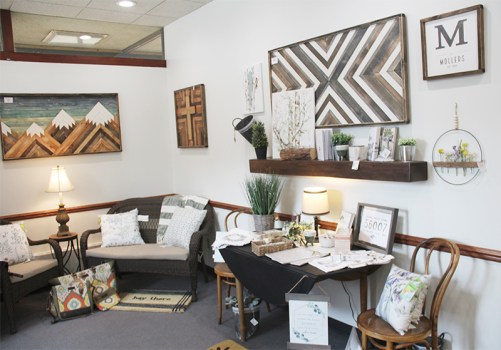 Every journey seems to start with one small step. Some may know their intended path, but others allow the breeze to guide them along its own trail. So is the case for Matt and Angela Moller, owners of The Homestead Boutique in Albert Lea.

About five years ago, the couple decided they needed a change. Matt Moller was a plumber by trade, and Angela Moller worked from home as a graphic designer. While neither of them was afraid of hard work, they found their schedules didn’t seem to give them the flexibility they wanted when it came to their priorities, including their four children and their faith.

“He’s always been very active in youth sports and being a confirmation leader for years and years,” Angela Moller said of her husband. “So that was really important for him to have a job that allowed him to have the flexibility to do things that are important to him.”

Matt Moller began making furniture pieces in his shop before the couple started designing personalized signs. He’d build them, and she’d decorate them. Then Matt Moller found a niche in his craft — geometric artwork.

“I think it all started because I never throw anything away,” Matt Moller said. “We had made some signs, and I had a lot of scrap pieces and I wanted to do something with them.”

“He was really just trying to use what he had,” his wife added. “He’s a use-it-up, wear-it-out kind of guy.”

The couple started working from home using the business name Homestead Designs, in homage to their family farm that once belonged to Matt Moller’s grandparents. They worked from home, selling items online and at various festivals and craft fairs.

The business model worked for them. Matt Moller was still working over 40 hours a week, but he could decide when he worked.

The step from Homestead Design to The Homestead Boutique was one that came about by chance.

“It was kind of just a someday dream,” Angela Moller said. “Wouldn’t it be fun someday to have a store?”

Then one day she received an email asking her if she’d be interested in opening a boutique in the Dinah’s Style building. The duo went to view the place and decided it was worth a try.

“We haven’t really sought out the next step in our business,” she said. “We’ve kind of put our head down and done the work, and the next step has kind of appeared in front of us. And they’ve always just seemed like a step not really a leap.”

Growing by inches and not bounds helped keep their goals for their business feel more manageable. During the first nine months of operation, the boutique was a collaborative effort. The Mollers then rebranded the store The Homestead Boutique when they began exclusively running the business.

“When we had the opportunity to rebrand the boutique and take it over as our own, we knew that clothing was going to be a huge part of it, because we had already seen that there was a huge need for that in our community, and that our community wants to shop locally for clothing,” Angela Moller said. “So I kind of had to start with what felt familiar to me just the way I normally dress, just easy-to-wear comfy, casual mix-and-match affordable pieces. And then I was kind of pleasantly surprised to find that a lot of people appreciated that and shared my similar style.”

The couple agreed it was time to take another step forward at the end of 2021.

“As much as we love our space inside the Dinah’s building, we’ve just really been outgrowing it,” Angela Moller said.

Not only have customers requested more items of clothing, gifts and decor, the business is trying to fill gaps left by the closing of stores such as Herbergers, Sterling Drug and the Christian gift store Cup of Faith.

She also looked forward to being able to showcase more of her husband’s work in the store, which opened at the beginning of February at 211 S. Newton Ave.

Along with having a larger space, their downtown location will make it easier for customers to stop by. That’s very important to Angela Moller, who tries to accommodate their customers’ needs.

One of the tactics she used to make shopping easier during the pandemic was going live on Facebook.

“It started out as just kind of a silly little thing,” she said. “Again, kind of a way to reach people and help people shop.”

She noted despite the fair amount of foot traffic her business saw, she knew there were loyal customers who didn’t feel safe or comfortable leaving home — so she brought the store to them during live Facebook sales prior to the 2020 Christmas shopping season. It was so popular that she has continued to do the postings year-round, typically twice a month at 7 p.m. Sundays.

“That has been so much fun for us because we have so many really, really loyal customers who watch that,” Angela Moller said. “It kind of feels like we’re hanging out with them because they’re interacting with us in the comments.”

She said the live streams typically feature giveaways and special buys as another way for them to show their appreciation to those people who have helped build them up.

“That’s really what’s enabling us to grow,” she said of their loyal customer base.

The business’ new location features more clothing, gift ideas, locally made and sourced products such as jewelry and coffee and, of course, home decor.

“Everything we do is about our love of home,” Angela Moller said.