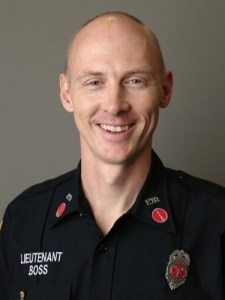 Brett was born on November 30, 1983, to Karen (Watkins) Boss in Fargo, ND and later adopted by Todd Boss in 1992. During his high school years, he was involved in Fire Explorers which is where his passion for service began and blossomed throughout his life. He graduated from Albert Lea high school in 2002.

Brett was heavily involved with the Albert Lea Fire Department. To say that he loved being a firefighter was an understatement and he showed that every day through his devotion to his department and crew. He was involved in everything firefighting by going to trainings, participating in firefighter combat challenges and Fight for Air Climb events. Following his diagnosis he became a strong advocate for cancer prevention for firefighters locally, and in the state of Minnesota.

Along with his role as part of the Albert Lea Fire Department crew he was also an instructor for the Live Strong program at the Y, was an EMT, a Hazmat Technician, fire investigator and firefighter instructor at Riverland Community College.

Brett liked to stay physically active and participated in half marathons, tough mudders and many other events.

Brett treasured his family. He loved camping and fishing with them. He loved cheering on his kids in every sport they were involved in and made every moment count.

Brett was a soft spoken, humble man and caring towards everyone that he met. He was the biggest fighter with the most positive attitude all the time and showed passion towards all of his work, family and coworkers. The impact he has made on his community can never be measured and will never be forgotten.

He is preceded in death by, grandpa, Dale Boss, grandpa, Arthur Watkins and uncles, Christopher and Michael Watkins.

In lieu of flowers, memorials to Brett’s family are preferred. Every memorial will go towards Jaelyn and Aiden’s college fund.