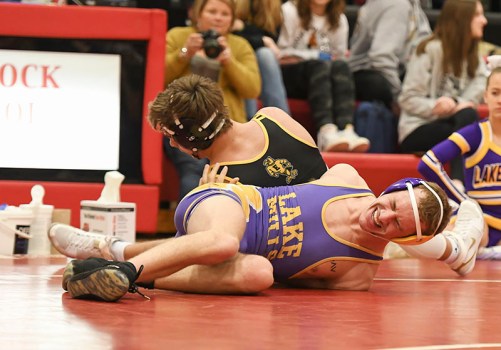 Brett Peterson of Lake Mills takes on Cade Shirk during the regional duals semifinals Tuesday in Britt against Emmetsburg. The E-Hawks won 41-33. Lory Groe/for the Tribune 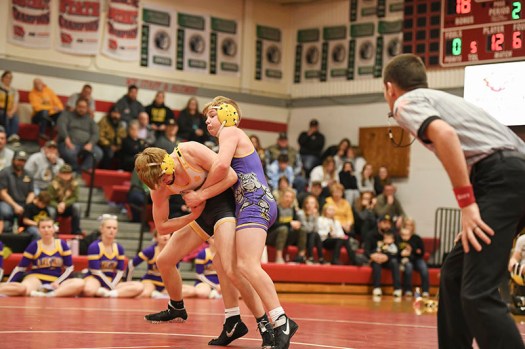 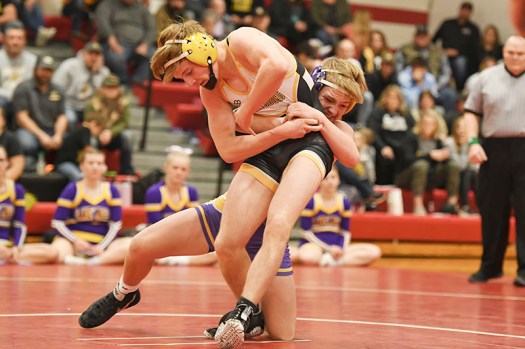 Carter Christianson of Emmetsburg wrestles against Ryerson Boevers during the regional duals Tuesday in Britt. Lory Groe/for the Tribune 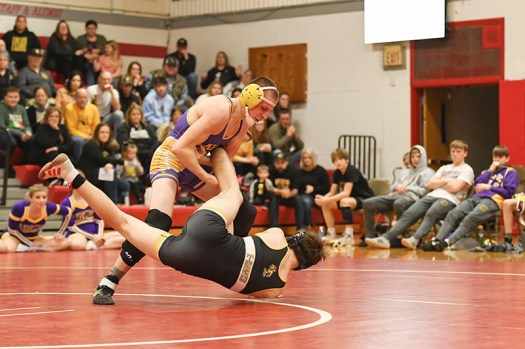 Cody Cox wrestled Dayton Dtrohman and came away with a pin at 132 pounds. Lory Groe/for the Tribune

In the regional duals semifinals, the Bulldogs squared off against 10th-ranked Emmetsburg.

In a dual meet Lake Mills fell behind early but battled all the way back to take a brief lead.  The E-Hawks were able to escape with a 41-33 win over Lake Mills.

“Our kids wrestled hard and gave themselves a chance to win the meet,” said coach Alex Brandenburg. “I am so proud of how much our young team improved throughout the year.”

Emmetsburg moved onto the regional finals and defeated seventh-ranked West Hancock to advance to state duals.

“If you would have told me before Christmas break our team of over half freshmen would come close to making state duals, I would have told you you’re crazy.” Brandenburg said. “After watching these kids wrestle tonight, I can tell you our program has positioned itself to be one of the best dual teams in the state over the next three years.”