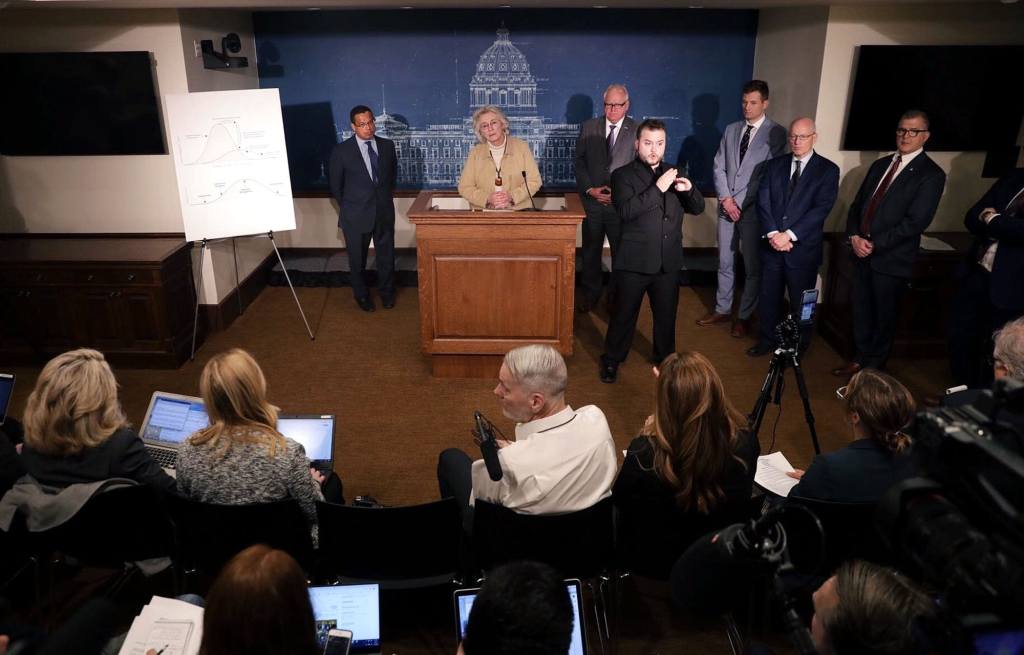 Minnesota Commissioner of Health Jan Malcolm (center) speaks during a press conference on March 13, 2020, where Gov. Tim Walz moved to limit gatherings in Minnesota to fewer than 250 people and declared a “peacetime emergency” to heighten the states readiness to respond to COVID-19. Evan Frost/MPR News

A major public health crisis facing the next Minnesota governor is unlikely to play out in the same fashion as COVID-19 did for Democratic Gov. Tim Walz.

As the pandemic moves toward a more-hopeful phase, the Legislature is contemplating changes to the emergency powers laws that gave Walz tremendous leeway to impose restrictions, spend money and mostly guide the health response on his own.

It was March 13, 2020, when Walz stood before journalists at the state Capitol to announce a little-understood action amid increased coronavirus concern across the globe.

“We are going into a heightened state of readiness to protect Minnesotans,” Walz said, announcing he had signed a peacetime emergency order just before.

“A peacetime state emergency will allow the state of Minnesota to respond more rapidly as issues evolve,” he said. “I would ask you all to think of this as opening the toolbox. We’re not taking a tool out of it as of today.”

Minnesota remained on emergency footing for 474 days. And many tools did come out in the form of more than 100 additional executive orders from the governor that built off the first.

While initially deferential, many in the Legislature and the public grew frustrated with the centralized decision-making. Republicans tried and failed repeatedly to strip Walz of his authority, only to succeed as part of a negotiated budget agreement last summer.

Now, the Legislature is zeroing in on the law that gave Walz so much control over the pandemic response — one that enabled him to close schools and businesses, halt nonessential surgeries, require masks and more.

“I hope when the dust all settles, there can be a real discussion with this governor or the next governor,” said Sen. Jim Abeler, R-Anoka, one of several lawmakers with bills to rework the law.

Among his proposals is to require legislative approval for a declared emergency extending more than a month. Now it takes majority votes of both chambers to end one.

“It has to be a cooperative way,” Abeler said. “It does nothing in the middle of a pandemic — or any emergency — to have some people puff up and decide that they’re the ones who know everything.”

Administration officials note that Abeler is among those threatening to fire the state health commissioner and that he has cast doubt on vaccines. And they say he’s been slow to move on health provider staffing capacity measures.

The executive powers issue is also a prominent piece of the governor’s race, with Republican candidates saying they wouldn’t employ the authority in the same fashion Walz did.

State lawmakers across the country have been revising laws on executive authority after unprecedented use during COVID-19. These laws usually help manage immediate emergencies — recovery from tornadoes, assistance during droughts or freed up resources to fight wildfires.

The National Conference of State Legislatures found that more than two dozen states approved updates last year. Hundreds of bills have been introduced and more legislatures are having their debates now.

Sen. Mark Koran, R-North Branch, is pushing several bills. He said the goal isn’t to reel the powers back entirely.

“We believe the governor needs emergency powers. We have emergencies whether natural or whatever, and he needs the power to act,” Koran said. “To move it beyond five days, there’s plenty of time to call the Legislature and regardless of what the natural disasters are otherwise, for us to come in and make sure that our citizens’ voices are heard from the very beginning.”

Koran said steps by Walz during COVID infuriated people who doubted it was a right-sized response. He said now that there is no standing emergency, it’s a good time to make changes.

“It was difficult to have the conversation [before],” Koran said, “because of the political movement that pushed on us that any healthy skepticism suddenly put you into a denial.”

While Republicans are sponsoring virtually all of the bills, there’s openness to change among Democrats, too.

Sen. Matt Klein, DFL-Mendota Heights, is also a doctor who tended to hospitalized COVID patients. He said Walz acted appropriately to confront a health crisis not seen in a century.

But Klein said, “after what was I think a first in our state’s history, employment of executive powers for such a prolonged period and over such vitriolic objection from the other side, it’s definitely worth just wondering about — what is the balance of powers in our democracy?”

Klein hasn’t put his ideas into bill form and said no Republicans have sought his advice. But he envisions a tiered plan.

Walz defends his approach to the pandemic. He said he was able to move quickly on things that would bog down the Legislature — testing, vaccinations and health staffing, to name a few.

But he said he is willing to engage in the conversation over how future crises are managed.

“If there’s talks about ways to streamline or what worked and what didn’t work, we’re certainly open to that,” Walz said. “Because I think we provide a unique perspective of future administrations and future unpredictable natural, manmade human disasters so that they have the tools to respond.”