Grayden was born December 1st, 1989 in Albert Lea, MN to Mark Thompson and Dori Etheridge. Grayden attended school at Glenville-Emmons where he graduated from in 2008. He played football, dabbled in FFA, and took his fair share of turns as class clown. As a kid you’d likely find him at the Glenville Beach, playing video games or trying to jump something on his four-wheeler at home on the farm. 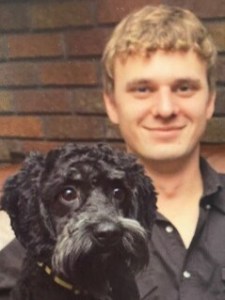 Grayden was a jack of all trades in a variety of professions over the years and always enjoyed the people he encountered. From an early age helping out on Knaack’s dairy farm, as he grew at Kelley Plumbing, Fastenal, Plaza Landscaping, Knaack Constructions, Stenseth Mowing, Peppered Cow, and most recently at Lou-Rich, he prided himself on his hard work and knowing how to do pretty much everything better than anyone else.

Grayden loved video games, cars, trucks, motorcycles, and pretty much anything with an engine or controller. He was a movie and TV encyclopedia. He had great taste in cinema which he talked about with friends and family quite often. Grayden had an amazing sense of humor and a smile that could light up a room. To know Grayden was to love Grayden.

Of all the things he loved, he loved his nieces and nephews the MOST! It’s no wonder he was the “Favorite, Fun Uncle.” He could often be found playing backyard football with them, video games, dress-up, you name it! No matter what activity they were doing you can guarantee they all had a smile on their faces and of course he spoiled them every chance he got!

Grayden will be missed dearly by his friends and family who will cherish their memories of lively conversations, entertaining encounters, full send adventures, lovely meals and lots and lots of coffee chats.