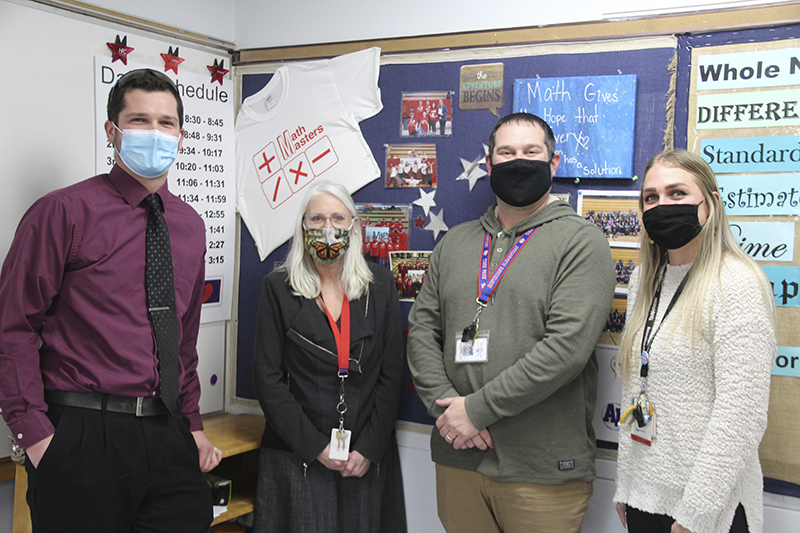 A program in Minnesota is recognizing excellence in mathematical skills for students in fourth through sixth grades as well as emphasizing the importance of the subject in everyday life.

Math Masters was founded in 1989 in Austin by Lewis Aase and Julie Espe, according to the program’s website. It has since grown to serve over 5,500 students each year at competitions throughout Minnesota and surrounding states.

In Albert Lea, there are students who participate in both fifth and sixth grades and who are led by teachers who are passionate about math.

Larry Rassler, a fifth-grade teacher at Hawthorne Elementary School, said he has been in the district for 19 years and participating in Math Masters for 18.

“Math Masters is mainly about problem-solving,” he said.

He noted he started as a coach after someone simply asked him if he wanted to do it.

Natalie Peek said this is her second year teaching fifth grade at Halverson Elementary School and her first year doing Math Masters. Teacher Anna Wescott typically leads the school’s team, but she is out on maternity leave.

“I am excited for it,” she said. “When I was in fifth grade I struggled with math.”

She said she enjoys seeing students find success in the subject.

Derek Ihrke, a fifth-grade teacher at Lakeview Elementary School, said he is in his fifth year as a teacher at the school and his third year leading the school’s Math Masters team.

He said math is probably his favorite subject to teach.

Robin Hundley, who has been with the Albert Lea district for 15 years and now teaches sixth-grade math at Southwest Middle School, said she initially started coaching Math Masters when she taught fifth grade, and then when the opportunity came up for her to teach math at the middle school, she jumped at it and has led the program there, too.

The teachers said to be on the Math Masters team, students take a test, and then the top students are selected to participate.

The students meet weekly after school leading up to the big competition practicing math problems.

At the competition, students can earn awards both individually and as a team.

There are fact drills, and both an individual round and a team competition.

The teachers said the program teaches the students how to be a good team member, how to face adversity and how to problem-solve.

Rassler noted many of these students have never had to work at math.

At the competition, there are math problems about probability, geometry, percentages and spatial thinking.

While there are some multiple choice questions, for most of the questions, the students simply have to come up with the correct answer.

Rassler said he enjoys seeing many of the students come out of their shells when participating, and each participant gets a T-shirt.

While last year was a virtual contest, and they had virtual practices because of the COVID-19 pandemic, this year they hope to compete in person.

“It’s fun to see them take on a role and succeed,” Peek added.

Hundley has a corner in her classroom dedicated to Math Masters with photos of previous years’ teams displayed.

The teachers said they look forward to this year’s competition.

Students can win plaques, medallions and ribbons in each competition element.