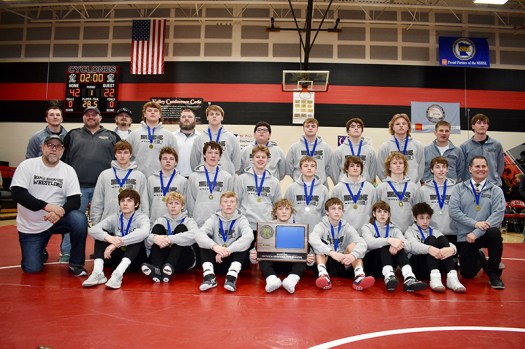 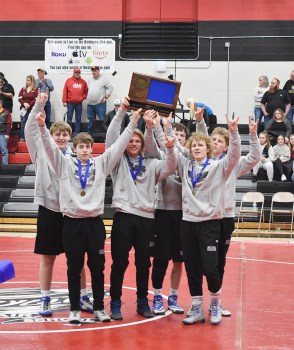 Their team colors are neutral, their mascot is non-existent, yet in its first year as a co-op, the Maple River/United South Central wrestling team is heading to the Minnesota State High School League Class A State Wrestling Tournament Thursday at the Xcel Energy Center in St. Paul.

“The first two or three days of practice was kind of like a middle school dance,” said Dan Dylla, co-head coach of the team, about coming together as one team. “The USC kids are on the south side of the wrestling room and Maple River kids, they would be on the north side of the wrestling room. They came in and put their shoes on and kind of got stretched. Then after about a week, it didn’t matter anymore. Kids are all intermingled and get along perfectly. As the season’s gone on, you probably couldn’t tell which ones are from which school.”

The cooperative added depth to the wrestling roster, which is important in a sport that relies on individual placements to advance the team.

“It’s an individual sport, yet it’s a big team sport that takes 14 kids,” he said. “They have a team, and that’s massive. Basketball takes five; we need 14 starters. With the co-op we’re able to put 14 kids on the mat that can be competitive.”

Dylla, who coaches with Terry Ochsendorf, said individually the schools may have six or seven wrestlers who have a good chance to win on any given night, but they are also putting another six or seven wrestlers on the mat who are a little inexperienced and not quite ready for that. The depth of the roster since the merge has given wrestlers better training partners and eased the pressure off of the less experienced wrestlers because they don’t necessarily have to step out against a varsity wrestler from another school.

“It’s a tough sport. You go out there by yourself on that mat. It’s you. Even though you’ve got a team behind you, it’s you that hits that mat,” Dylla said. “And that can be pretty scary.”

From the USC perspective, Dylla admitted they’ve struggled with numbers and not having a full line up because they didn’t have wrestlers at the right weights.

“Last year, we forfeited four out of the 14 weights most nights, so we were giving up 24 points before we walked on the mat. That’s a tough hill to climb,” Dylla said. “To beat teams we had to be perfect; and we were perfect at times. We’d wrestle 10 of the 14 weights where nine kids had to win, and we would win. But we can expect that every night.”

With 13 members from each school, the goal for the wrestling cooperative was to get to the state tournament, he said. The last time USC made it to the competition was 2007, when they placed third. The Maple River’s wrestling team had never gone before.

The MR/USC wrestling team beat Blue Earth Area Schools 37-28 in the section semifinals and went 42-33 against second-ranked Medford to clinch their ticket to the quarterfinals.

“We haven’t backed down from anybody all year. We’ve wrestled a lot of teams throughout southern Minnesota. We’ll wrestle AAA schools, AA schools and Class A schools like we are — it hasn’t bothered us,” Dylla said.

“In the first round we do get Jackson. Jackson County Central’s the No. 1-ranked team in the state. They are formidable. They are No. 1 for a reason. I mean, it was probably the draw. I would imagine everybody in the state would say, ‘Well, if we go to state we hope we don’t get Jackson,’ but we got them and that’s fine. I mean, it doesn’t bother us.”

Dylla noted they saw the Jackson County Central team in action in mid-December.

“We’ve seen them, we know what they have, and we know they’re tough, but we’re gonna go out and wrestle them to the best of our abilities and see what happens,” he said.

Those attending state will include eight wrestlers recognized at the Gopher All Conference meeting Tuesday in Owatonna. Boden Simon, Ethan Evenson, Cooper Ochsendorf and Thayne Decker, all of Maple River, received All Conference recognition; Wyatt Walters of Maple River and Ethan Elveback and Konner Harpestad of USC received honorable mentions; and Collin Van Cleave of USC received the Sportsmanship Award.

Many of those recognized are seniors.

“We’ve got seven seniors, five of those kids have won a tremendous amount of matches over the last four or five years. They’ve been horses in their lineups all the time, so they’re going to be sorely missed, just like any team would miss their seniors,” he said. “As far as that goes, it’s going to be tough, but our junior varsity had a good year. I think it benefited those kids to not have to wrestle varsity to get a lot more experience and get better experiences.”

In the end, Dylla said the wrestlers all have a job to do and are going to wrestle up to their abilities, but if they don’t win on a given night even after they’ve done what they can do, they’ve still been part of a team. While they may lose individually, they can still see success.

“I think the co-op has helped us do that. It’s put kids in a position where they could be successful; and that’s been good.”