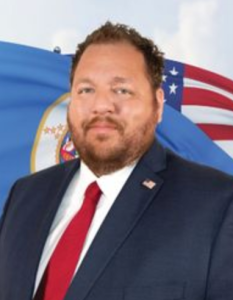 “As the chairman for the county Republicans, I couldn’t be more proud of the excitement level we’re seeing,” Hoffman said. “Metro Minnesota doesn’t reflect the values of southern Minnesota, and in Freeborn County every Republican candidate on the ballot won during the last election. This election seems to mean even more to Minnesota because of the governor, attorney general and secretary of state races.”

Hoffman said he was surprised to see the county straw poll winner be Murphy but was also surprised to see how few votes other candidates received. He attributed this to the many new people participating in the caucus.

He said he wasn’t surprised to see Jensen win the statewide poll.

“If these two examples tell us anything, it is that we will have a very interesting election season ahead, and I’m looking forward to it especially with everyone that has chosen to get involved with us locally now,” Hoffman said.

Jensen received 38% of all votes in the statewide poll, with Gazelka coming in second with 14% of votes.

Minnesota Republican Party Chairman David Hann said there was a strong showing of enthusiasm from Republicans all across the state Tuesday and the party is excited and unified for the opportunity to make their case to voters and elect Republicans this fall.

DFL Party Chairman Ken Martin in a response to the statewide Republican poll results said Jensen has put lives in danger by lying about the COVID-19 vaccine for his own political gain.

“His success last night underscores the fact that all the leading Republican candidates for governor put politics before the health and safety of Minnesotans,” Martin said.

— Information from the Republican Party of Minnesota