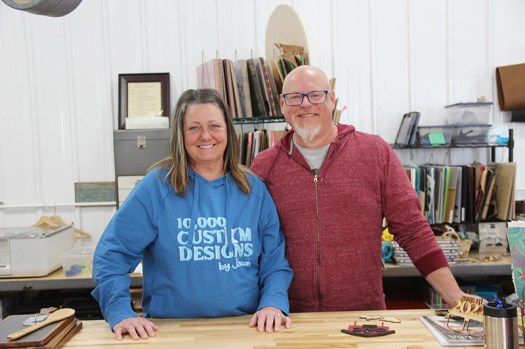 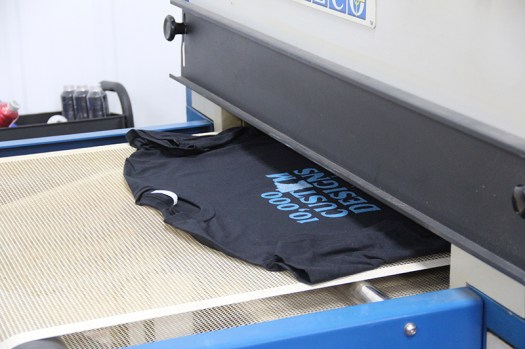 A T-shirt runs through a dryer at the 10,000 Custom Designs by Jason shop in Ellendale. Sarah Stultz/Albert Lea Tribune 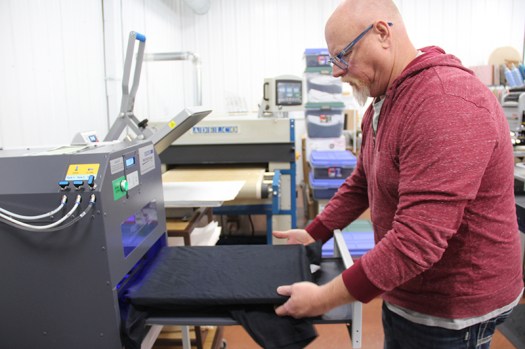 Jason Schreiber puts a T-shirt on a machine to prepare it before putting on a logo. The company offers direct-to-garment printing itself, as well as screen printing for large orders through a partner. Sarah Stultz/Albert Lea Tribune 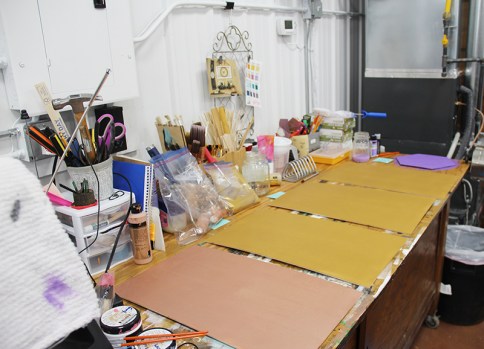 Jenn Schreiber said she does most of the painting on their projects at this station in their shop. Sarah Stultz/Albert Lea Tribune 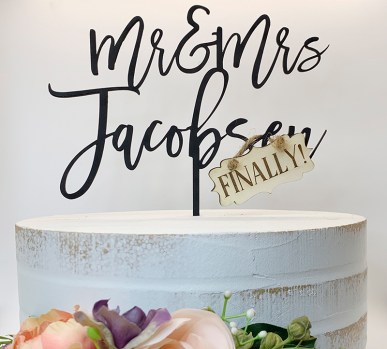 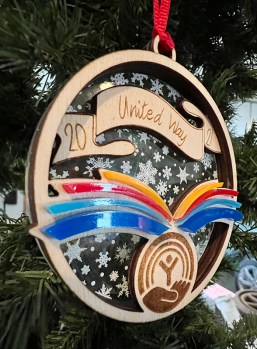 The company has created several ornaments, including this one for the United Way. Provided 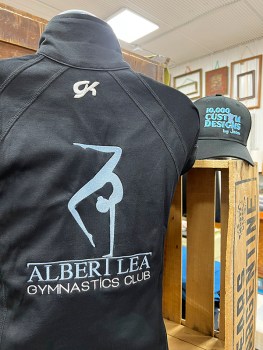 One of the services 10,000 Custom Designs by Jason offers is embroidery, as seen on this jacket for Albert Lea Gymnastics Club. Provided 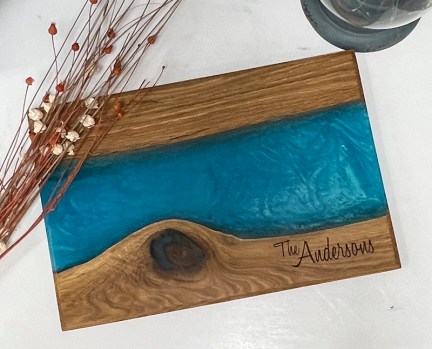 Schreiber said he can create many different personalized cutting boards, including this one that also has a blue acrylic. Provided 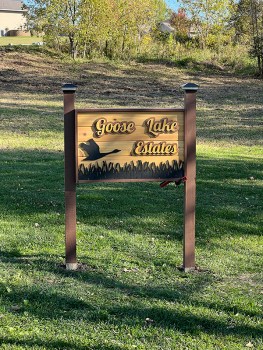 This new sign for Goose Lake Estates was created by 10,000 Custom Designs by Jason. Provided 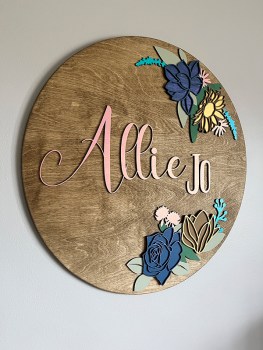 Visit with Jason and Jenn Schreiber of 10,000 Custom Designs by Jason in Ellendale for only a few minutes, and you’ll learn quickly the options are limitless for the new company that started last year.

The business — which offers embroidery, direct-to-garment printing, screen printing, custom logo design, and laser engraving and cutting — is already making a name for itself in the area in the short time it has been open.

“The name Custom Designs really is the heart of the business because almost everything we do is custom,” Jason Schreiber said. “If you’re looking for something everybody else has, we don’t do that.”

The business started in the middle of the COVID-19 pandemic when the Schreibers said they were forced to work from home during the shutdown.

Jason Schreiber said he and Jenn had been in a long-distance relationship — he had lived in the Albert Lea and Glenville areas for over 30 years, and she was in the Shakopee area. They both had been married before and together had eight children.

When the pandemic started, they said it seemed like a good opportunity to move in together because at that point it looked like the pandemic was going to be never-ending and they would always have to work from home.

They both sold their houses and together they bought a new place in June 2020 in rural Ellendale. In February 2021, they were married in their kitchen by one of their children.

Jason Schreiber said in June 2021 the company he worked for downsized and he lost his job.

At the same time, he and his wife were talking to a local embroidery company about buying their business with plans to put it into a remodeled shop on their property. They added an HVAC system, windows, insulation, LED lights and redid the floors in the shop, and the company backed out at the last minute, he said.

“We had invested thousands of dollars in the studio …” he said. “We took the weekend to think about it, and said we’ve invested all this money, we might as well start.”

Their company, 10,000 Custom Designs by Jason, officially launched in September 2021, though they relaunched an Etsy shop earlier under a different name, BirchwoodCreative.

He said in 2019 he purchased a laser-cutting machine and loved to design and create things. They purchased a second laser from one of his wife’s friends along with the Etsy shop in early summer 2021 and then shut down the shop for a time before relaunching it.

The shop offers four different sizes of cake toppers made from premium birch wood purchased from Root River Hardwoods, which they sell all over the United States. It also sells table numbers, favors and tags, custom signs other event decor.

He said the machine is very intricate and can engrave or cut down to the thickness of a human hair.

He said they can engrave on any kind of wood and can also mark on metal.

Jason Schreiber said he knew there was a need for quick, easy, less-expensive screen printing, so they thought there was an opportunity for direct-to-garment printing on T-shirts and sweatshirts. They also have a partner who does screen printing for larger orders. The design on the clothing item can be something customers submit, or he can come up with one, as well.

Some of the other things they make include embroidered Richardson 112 caps, patches, wood veneer stickers and stamps, among others. He can also sell a digital file to another laser company.

Through this point, their largest challenge has been the shortage of supplies, but they continue to work through those issues.

“The biggest part of the business I enjoy is designing,” he said.

He said the company can turn things around in less than a week depending on availability of materials.

The company can be found online at 10000customdesigns.com.