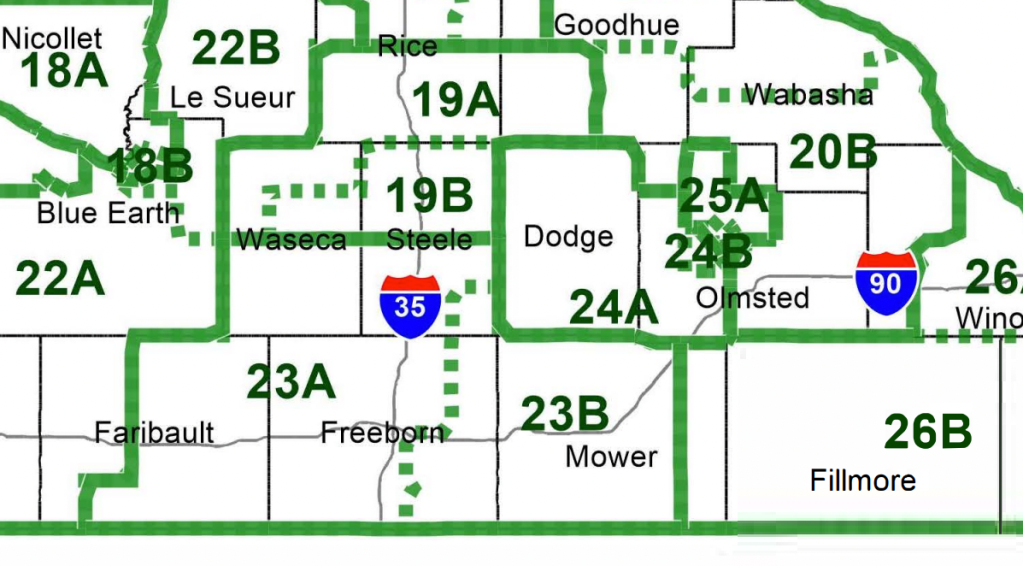 The eastern third of Freeborn County will join most of Mower County to form the new House District 23B, according to the new district maps released Tuesday by a Minnesota Supreme Court special redistricting panel after a months-long battle.

House District 23A will include the western two-thirds of Freeborn County and expand further west into Faribault County and north into Waseca and Steele County.

The changes provide a shakeup in district lines set 10 years ago.

Redistricting occurs every 10 years following the census to help reflect changes in population in congressional legislative districts. The goal is to make all districts equal in population.

The House districts for Freeborn County had previously been District 27A with a small area in the southeastern part of the county in District 27B.

Under the new district lines, Hayward, Hayward Township, London Township, Moscow Township, Myrtle, Newry Township, Oakland Township and Shell Rock Township will be in District 23B, while the remainder of Freeborn County will be in 23A.

Hayfield, where District 27 Sen. Gene Dornink lives, will no longer be in the same Senate district that covers Freeborn and Mower counties, as all of Dodge County is now in Senate District 24.

The 2022 congressional statewide map stayed largely the same in the 1st District, with every southernmost county included, along with Watonwan, Nicollet, Blue Earth, Waseca, Steele, Dodge, Olmstead, Winona, Wabasha and Goodhue. Parts of Brown and Rice counties will also compromise the 1st District. Goodhue and Wabasha counties are new to the district, while Cottonwood County will join District 7.

The state will continue to have eight districts.

His biggest concern from a personal standpoint was the loss of Dornick as District 27 senator.

“I really would have liked to have Gene Dornick stay right here as our senator with these lines drawn as they are now,” he said.

In a statement DFL Party Chairman Ken Martin said he was grateful for the redistricting panel and their hard work over the last few months.

“It will take some time for us to conduct a full analysis of these maps, but we are excited nonetheless to have this process conclude and have a clear sense of the political landscape in front of us,” he said. “Across Minnesota, local DFL Party organizing units will be working overtime to endorse our candidates in new districts and ensure our campaign infrastructure is ready to kick into high gear.”

Redistricting is also taking place at the city and county level, with more information to be coming in the upcoming weeks.