NILA CAROL (FAGERQUIST) ELLERTSON (80) passed away 2-22-22 at her home in Queen Valley, Arizona. Her Husband Phil and Sister Lois were blessed to be with her when she died. 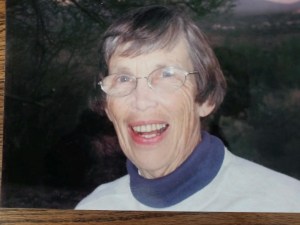 Nila was born in Scott City, Kansas and raised on a farm near Dighton, Kansas by her parents Carl and Maude Fagerquist. She was the oldest of their three children.

She graduated in the class of 1959 from Lane County Community High School and then earned her LPN License from Dodge City Community College.

One of her first jobs out of nursing school took her to California where she worked at Anaheim Children’s Hospital. It was during that time she met Phillip Ellertson, who was five years out of the Navy. They fell in love and married August 12, 1965, in Dighton, Kansas.

Nila and Phil lived in Northern Iowa and Southern Minnesota for 25 years. She was employed at St. Johns Nursing Home in Albert Lea, Minnesota for 15 years. In 1989 they moved to Apache Junction, Arizona, and then Queen Valley, Arizona in 2000.

Nila became a beloved member of the community and was involved in several volunteer organizations and fund-raising projects. She loved animals, horseback riding, gardening, and all things in nature. She was the ultimate desert tour guide and loved to share her knowledge of desert life with friends on hikes, campouts, and jeep trips.

She is pre-deceased by her parents, Carl and Maude Fagerquist, her brother Gerald (Jerry) Fagerquist and numerous aunts, uncles, and cousins. She is survived by her husband Phillip Ellertson of Queen Valley, Arizona, her sister Lois Fagerquist of Black Forest, Colorado, and her devoted chihuahua “Lil Lady.” She will be forever missed by a close-knit group of friends who supported her through her 11-year battle with cancer and heart disease. She was a member of an elite group of survivors that referred to themselves as the “Little Toughies.”

We would like to thank the Apache Junction Care Center Rehab Dept. and Aviant Health Care Hospice Nurses for their outstanding care and support.

Knowing how much it meant to her to give back to the community, the family requests that memorials be made to Queen Valley Fire Auxiliary in Queen Valley, Arizona, or the Boyce Thompson Arboretum in Superior, Arizona.

A Celebration of Life with family and friends is being planned for March 26th at the Recreation Hall in Queen Valley at 2:00 p.m.