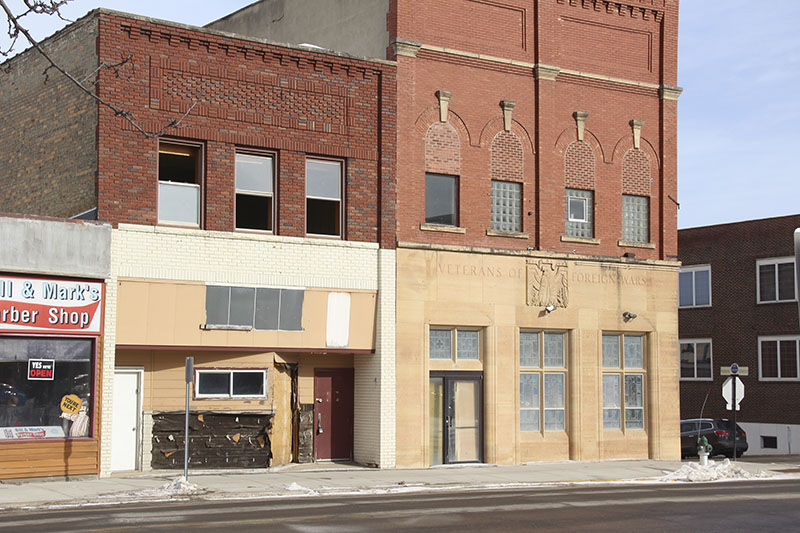 Demolition and renovations have begun at the former VFW building and the neighboring building at the intersection of Newton Avenue and Clark Street to turn the space into apartments. The project has been approved for state historic tax credits. Sarah Stultz/Albert Lea Tribune

Proponents of the Minnesota Historic Rehabilitation Tax Credit are again advocating at the state Capitol for an extension of the program, which advocates say gives economic feasibility for developers to preserve historic buildings.

The credit provides 20% reimbursement costs for developers of historic buildings listed on the National Register of Historic Buildings and was originally created as a bipartisan initiative in response to job losses sustained during the Great Recession. The state tax credit parallels an existing federal rehabilitation tax credit program that has existed since the 1980s.

Though the Legislature and Gov. Tim Walz last year approved extending the credit for one year as part of the omnibus tax bill, this year proponents are asking for an eight-year extension.

Heidi Swank, executive director of Rethos, formerly known as the Preservation Alliance of Minnesota, said the one-year extension in 2021 made sense in light of all of the other funds that were needed to support the COVID-19 pandemic, but now she hopes legislators will recognize the need for a longer extension as the benefits of the program are clear.

A new report released from Minnesota’s State Historic Preservation Office states every $1 of tax credit created about $11.30 of economic activity in the state.

In 2021 alone, the historic tax credit generated $1.4 billion in economic activity, including $6.93 million in labor income, including 9,660 jobs, the report stated.

Since Minnesota’s Historic Tax Credit was created in 2011, it has created over $5 billion for the state’s economy and saved over 170 historic buildings in communities across the state.

In Albert Lea, the tax credit program is presently part of a project to turn 131 and 137 E. Clark St. — known historically as the Rasmus Jensen Building and the Danish Brotherhood Society Lodge 75 — into 20 loft-style apartment units.

Other southern Minnesota projects that have benefited from the historic tax credit in recent years include a project in New Ulm that converted the vacant New Ulm High School into affordable housing and a project in Faribault that updated industrial space at the Faribault Woolen Mill Co. The Grand Center for Arts and Culture in New Ulm has also received historic tax credit support.

Swank said 70% of a project cost for rehabilitation of a building is labor costs.

“Those are jobs for people, money that stays in Albert Lea and in that economy,” she said.

She said the more the reuse of the historic buildings can be incentivized, the more they can increase jobs in the local area, which in turn gives people more disposable income to spend in restaurants and other businesses in the community.

Historic buildings also carry with them valuable memories of when people were younger or of times they spent with family members or friends, she said.

“Old buildings are like memories we can touch,” Swank said, noting that keeping the buildings around and making sure they are still able to be used is important for the next generation to make new memories.

She compared the historic buildings that were demolished in the state of Nevada, where she previously lived, with those in Minnesota and said she can tell the difference in the number of buildings that have been saved in Minnesota because of its tax credit program.

She also emphasized that the money is not paid out in tax credits until the project is completed.

“The developer puts up the money upfront, and then the state comes in and pays the tax credit only after the entire project is done,” Swank said. “It shows a good sense of responsibility. These are our collected dollars, and we need to be careful of how we spend them.”

The state report showed developers filed 34 applications for the tax credit in 2021, which was a record high for the program, largely because of the planned sunsetting of the program. These developers reported planned spending of $890 million to complete their projects.