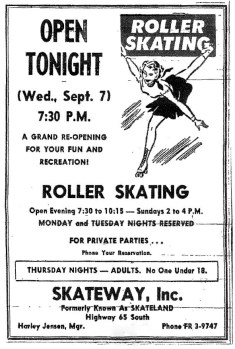 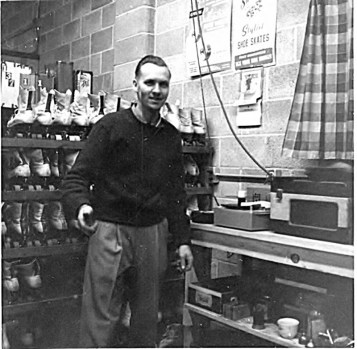 Harley Jensen stands behind the counter where people could rent skates. Provided 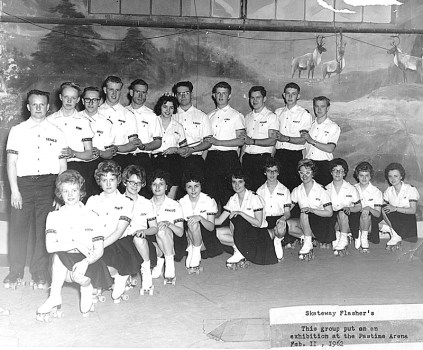 The Skateway Flashers was a group that would do skating performances at various roller rinks in Minneapolis, Brownsdale and other locations. It was a group of roller skaters who loved to skate and had great skating ability. Provided 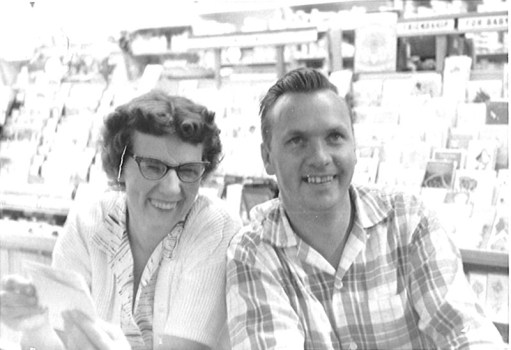 Harley and Helen Jensen started the Skateway roller rink in 1958. It became Skateland and was open through 1965. Provided 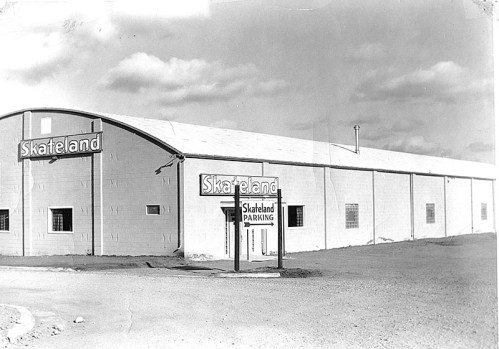 Skateland was a popular destination for many in the late 1950s and early 1960s. It hosted skating shows, dance skating, the Skateway Flashers and even and King & Queen contest. Provided

Current and former Albert Lea residents are fondly remembering their time at a popular entertainment venue in the community from the 1950s and ’60s that was demolished this week because of age and disrepair.

The former Skateway roller skating rink, which at one time was also known as Skateland, was leased to Gibson’s for a Pamida store in 1965 and then sold to Naeve Hospital in 1989. It most recently was part of Mayo Clinic Health System’s HealthReach campus, and hospital officials said the condition of that portion of the building was not suitable to be restored.

“If I was a young boy, I’d be crying right now,” said Wayne Jensen, whose parents Harley and Helen Jensen built and owned the roller rink for several years. “We’ve got a lot of old memories there.”

Wayne Jensen, who now lives in Phoenix, said it was always a dream for his father to have a roller skating rink in Albert Lea.

Harley Jensen started out with a large portable roller rink he would take to various small towns in Minnesota and northern Iowa, including Laverne, Jackson, Zumbrota, Lansboro, Kiester, Hartland,

For 10 years, he and his wife took the portable rink to the small towns for about three to four months of the year in the summer, and then right after school would open, they would take the portable rink down and go to Sherburn, where they rented a large hall under the theater there.

In 1958, they built the roller rink on South Broadway known as Skateway in Albert Lea.

Despite having a brick and mortar building, they followed the same schedule they had been using previously, operating the rink for nine months a year and then closing it for three months in the summer.

Wayne Jensen and his brother, Larry, said their father used to say, “you skate a town to death, if you don’t give it rest!”

Harley Jensen continued taking the portable rink to the small towns around Albert Lea during the summer, including Glenville, Emmons and Hartland, and then in September of each year they would have a grand reopening at the Albert Lea rink.

“Everyone was ready to put their skates back on,” they said.

Harley Jensen also purchased four buses and would take them to the various surrounding small towns he had skated in and offered free rides to those who would skate at the Albert Lea roller rink.

The brothers said the buses were packed every night.

“Dad and mom were probably the neatest parents to all the kids in Albert Lea,” Wayne Jensen said. “They had to love kids to be able to do that all those years. That was the thing to do in Albert Lea.”

‘The parents of all the kids in Albert Lea’

Every year the Jensens had a King and Queen Contest, and the two brothers and their parents would assemble skaters to perform in skating shows. The brothers said Wayne did most of the choreography, while Larry did most of the advertising.

Wayne Jensen also assembled a group of good skaters called Skateway Flashers that would do skating performances at various roller rinks in the state.

“The Flashers consisted of some roller skaters that loved to skate and showed great skating abilities,” they said. “But more importantly, they were a group of skater friends that had a wonderful time skating.”

“The roller skating business is a hard business but something that was really enjoyable,” he said, referencing both the memories and the youth they got to work with.

He said his parents loved anyone who came into the rink, and if someone didn’t have the money to skate, his mother would still let them in.

“They were the parents of all the kids in Albert Lea,” Wayne Jensen said.

Larry Jensen said his first recollection of Skateland was when he was 5 years old and climbing on the cement blocks for the building before it was built and he got his foot stuck inside one of the blocks and ultimately fell and hurt himself. His parents picked him up and comforted him.

He said he was saddened by the thought of the building being destroyed.

“Hundreds of kids have memories of that rink,” he said. “A first date, a first kiss, the music and the fun times. It represents more than just a cement block building. It has extremely fond memories for thousands who spent their youth and young adult days inside that pile of cement blocks. They may have held hands for the first time under that mirrored ball or maybe even met their spouse there.”

Several people posted on Facebook this week that they had good memories of the rink, including birthday skating parties, doing the ‘Hokey Pokey’ on roller skates and the bus rides from the smaller towns to the rink and back.

Larry Jensen said his brother met his wife, Sandy, at the roller rink in Glenville.

Sherry Allen Guffey of Copperas Cove, Texas, and formerly of Albert Lea said as a person living in the south end of town, they were fortunate to have a roller rink and bowling alley practically in their backyard.

She lived on Margaretha Avenue and was only three blocks from Skateland.

“Helen and Harley Jensen had a little goldmine in that roller rink, and I can’t think of anyone better to host children every weekend,” Guffey said. “They truly were like everyone’s second parents.”

She said Skateland wasn’t just a roller rink; it was a social hall.

“That’s where you met up with your friends and had crushes on boys,” she said. “You could buy a Payday candy bar from the vending machine. I can still see Harley behind the counter waiting on another kid.”

Sandy (Banks) Stephens said she and her friends will never forget the wonderful times they had skating at the rink. She remembers skating from 7 to 10:30 p.m. each evening and from 2 to 4 p.m. on Saturdays and Sundays.

“Harley and Helen Jensen were wonderful people,” said Stephens, who still has her skates. “They enjoyed having us there and were like parents to us.”

The Jensens were recognized in 1988 during a Skateway Reunion at the Freeborn County Fairgrounds when the mayor at the time gave the couple a key to the city.

The brothers thanked everyone who skated there.

“The building may be gone, but the memories will last forever in Albert Lea.”