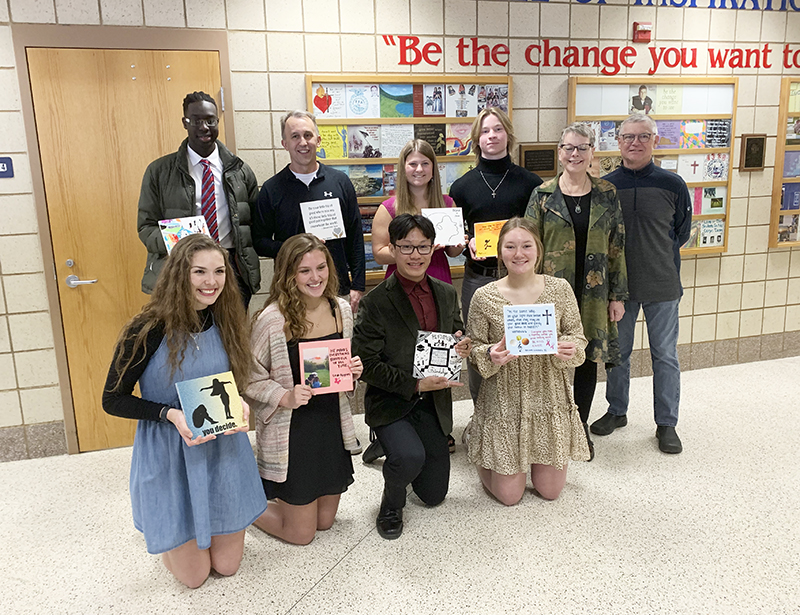 The wall honors Josh Kuphal, a former student who died of spina bifida. As the 12 inductees were recognized, attendees watched a video about each

member explaining the inspiration for the tile they would contribute to the wall. Social studies teachers Jim Haney and Brittany Utzka hosted the event.

Gaston is school assessment coordinator and dean of students for the Albert Lea Area Schools.

“Sean is inspired by his family — people that are passionate about what they do, achieving things that people think can’t be done or see as too hard to try,” Haney read.

Gaston said the pictures on his tile were symbols of his family.

Chalmers, a senior, is involved in her youth church group, youth soccer, is a Life Center recreational assistant, is involved with girls soccer, serves as hockey manager, is involved in the the concert, marching and jazz bands, the symphony, pitt and community orchestras, is in student council, participates in the Well-Being Club, AhLaHaSA club and the Fellowship of Christian Athletes. She plans to attend Bethel University.

“I know I’ve been inspired by so many people who are on the wall, and it’s just such an honor to be counted among them,” she said in her video.

“Lori has been training adults through a management career for 30 years,” Haney said. “She has worked in the [Autism Spectrum Disorder] room for two years, and the eighth-grade academy for four years.”

In her video, Larsen thanked her parents and teachers, and said the Bible, with messages of comfort and inspiration, served as daily motivation.

“Mason is inspired by seeing other people succeed [and that] inspires him to do the same,” Haney said. Buendorf, who is involved in cross-country, track, National Honor Society and his church choir, will attend St. Olaf with a focus in economics.

In describing his tile, Buendorf said it was a picture of the sun with a man in front of it reaching for the sky.

Crissinger graduated from Fairmont High School and earned a bachelor’s from Luther and a master’s from Walden University. She has been teaching for about 15 years.

“A portion of Rebekah’s nomination letter stated, ‘I’ve had Mrs. Crissinger as my orchestra teacher for seven years,’” Haney said. “And every single one of those years she has treated me with the utmost kindness.’”

In her video speech, Crissinger explained a quote.

“Accept what is, let go of what was and have faith in what will be,” she said. “This quote is really special to me because I have struggled with anxiety for many years, and this helps remind me that I need to let go of the things that I don’t have control over and what’s happened has happened and I can’t dwell on that.”

Wacholz is involved in volleyball, basketball, softball, band, jazz band, student council, the Well-Being Club and the trap team. Her hobbies include camping, being on the lake with her family and spending time with friends. Wacholz plans to attend a four-year school.

“I’m totally honored to be able to be up on the Wall of Inspiration,” she said in her video. “It means a lot.”

In her plaque, she chose to have inspirational verses and symbols, including Matthew 5:16. “In the same way, let your light shine before men. That they may see your good deeds and glorify your Father which is in heaven.”

“My faith is probably the most important thing in my life, and I’m at this point in my life because of my faith,” she said.

Schneider earned a bachelor’s from the University of Northern Iowa, a master’s from Southwest University and a principal’s license from Minnesota State-Mankato. He has been teaching for 27 years.

“He’s inspired by his family as they have had to face hardships with a positive determination and kindness,” Haney said.

In his nomination letter, the nominator said Schnieder’s encouragement kept them going when everything else in them wanted to give up and quit.

“I chose the quote, ‘Do your little bit of good where you are so those little bits of good where you are; it’s those little bits of good put together that overwhelm the world,’ because even those it seems like we can’t change the whole world we live in right now, we can focus on making the parts where we’re at a better place,” Schneider said in his video. “We can be kind in our words and actions.”

Kong is involved in cross-country, National Honor Society, track, link crew, student council and the jazz and marching bands. He is inspired by his parents, hard work, dedication and integrity. He hopes to enter a college and pursue a degree in engineering.

“He is always ready to try new things and he constantly strives to be the best he can be,” Haney read from Kong’s nomination letter. “Whether it’s academics or athletics, Leon always gives it his all.”

Rognes is involved in swimming, track, Fellowship of Christian Athletes, link crew and has helped with adapting physical education.

She is also involved with Crossroads Axis, serves as a lifeguard and works at the Life Center of Freeborn County, among other things. She enjoys traveling, swimming, being outside and spending time with friends.

“Leah was accepting of all students and would be the first one to assist a student who might be struggling with school,” he read. “She taught her friends about disabilities and that wheelchairs, walkers or other physical supports are just that, supports. They don’t define the person behind the chair or walker.”

In her video, Rognes said part of her plaque included a picture of her and her dog while watching a sunset.

“I thought this was important for my plaque because I think that sunsets are just a beautiful reminder of how amazing this life is and just don’t take any day for granted,” she said.

Part of Keszler’s nomination letter stated, “Kez always has a positive attitude and keeps the learning environment fun with her jokes and the best lab experiments. She is very considerate of others, especially when she asks if we are OK with something she is teaching us.”

In her video, Keszler described her tile as being about life, light and wisdom.

“These are the things that you only own once, and you give them to others,” she said.

Dual is involved in orchestra, cross country, basketball and tennis, though outside of school he works at Hy-Vee. He plans to study nursing.

Part of Dual’s nomination letter reads: “There is no more positive person in our school community than Garang, or G, as I like to call him. I’ve been in this building for 18 years and encountered many students, but G stands out above the crowd. I graduated from ALHS and I thought I had lots of school spirit but G is the most proud of his school that I have ever seen.”

Anfinson, who is involved in softball, show choir, National Honor Society and link crew, plans to attend Minnesota State-Mankato and major in nursing.

In her tile, she included a dandelion, which she said was the flower kids made a wish on.

“It reminded me of just believing in myself because the dandelion is a dead flower and when you blow into it and the seeds get planted and they grow into brand new flowers,” she said. “I think it’s really special.”

‘Just getting up on that mic, selling: it’s a…