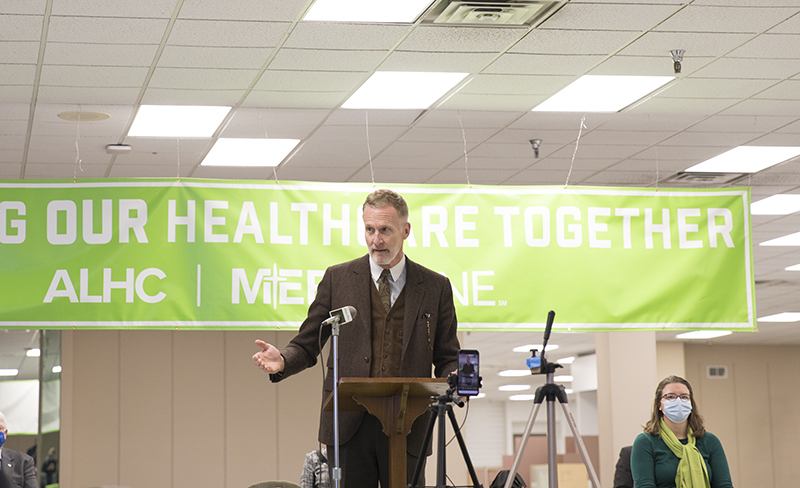 When the Albert Lea Healthcare Coalition formed, the goal was to get a new clinic into the area. And they’ve done that. But there’s still the issue of insurance — specifically what’s in-network and what’s not.

So early in the morning on March 16, Brad Arends, president of the coalition, trustees from the board and concerned citizens will hold a Zoom meeting with Keith Ellison, the state’s attorney general.

Jan Mattson, who attends coalition meetings, will be on the call. She’s also currently on the Blue Cross Medicare Advantage program and wants to be able to use her health plan at the new MercyOne clinic.

“We’re paying more for our health care because we can’t go to MercyOne,” she said.

“I also use the same plan in Arizona,” she said, referring to a health plan she uses to see a dermatologist. “I never get an extra charge in Arizona, but I get charged at Mayo.”

Mattson has contacted the attorney general’s office as well as local legislators.

“It costs me more to go to Mayo than it would if I was covered at Mercy,”she said.

“It’s costing me money, because of their decision,” she said.

Annie Mattson decided to switch from the Blue Cross Medicare Advantage program to United Healthcare solely because MercyOne wasn’t in-network under Blue Cross and she couldn’t use it.

“I was forced to just use Mayo Clinic,” she said. “I didn’t want to do it because I had the Advantage plan and that’s the whole problem with Blue Cross Blue Shield, they’ve kind of got a monopoly on that — the Advantage plan.”

“When you’re in pain it would have been really nice to be able to go to [MercyOne],” she said.

And if MercyOne gets into Blue Cross Blue Shield’s network, she believes customers would be able to save money.

Paul Stieler has the Medicare Supplement Senior Gold plan, which means he can go anywhere for health care, including MercyOne or the Albert Lea Mayo Clinic.

But he called Blue Cross once regarding the company’s partnership with Mayo, and asked if it was a monopoly.

“They said, ‘no, because there’s no competition,’” he said. “Isn’t that what a monopoly is?”

And while he’d like Mayo and Blue Cross to re-open negotiations, Arends, for his part, wasn’t as optimistic the coalition could convince either party to re-open the contract and said the odds now were against them.

“I think it’s going to be a big ask to get them to agree to open up that contract and renegotiate it with, in essence, two years to go,” he said.

But he believed having this phone meeting now would generate enough attention to cause necessary change for the next negotiation.

“We’ve got other options, but we want that Blue Cross option available too,” he said.

He also said Blue Cross and the attorney general have received hundreds of calls and letters.

In the meantime, the coalition has reached out to HealthPartners, Medica and UnitedHealthcare and explained their situation.