A profession of helping people on their worst days 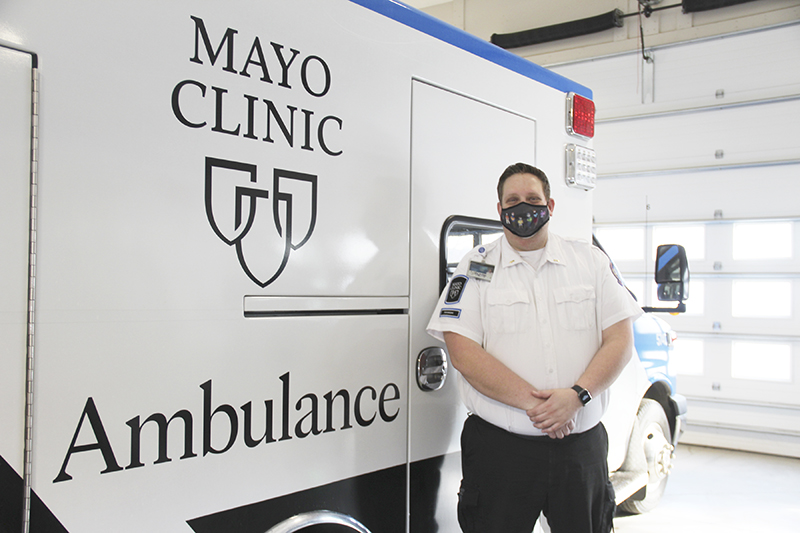 Andy Hanson is a paramedic with Mayo Clinic Ambulance. He has worked for the company for four years and became a paramedic two years ago. Sarah Stultz/Albert Lea Tribune

Despite the challenges of the last two years with the COVID-19 pandemic, Andy Hanson, a paramedic with Mayo Clinic Ambulance, will be the first to tell you he’s got the best job.

“I absolutely love helping people when they need it the most,” Hanson said.

Hanson, of Albert Lea, has been an EMT since 2007, first with volunteer ambulance departments in Adams and New Richland, and then joining Mayo Clinic Ambulance four years ago. After going back to school, he became a paramedic two years ago, and then last April he took the team lead position with the hospital ambulance service. Crews work 12-hour rotating shifts of partial days and partial nights.

“We help people in all sorts of environments — blizzards, rainstorms, 90-degree days, 45-degree days that look warmer than they are,” he said. “It’s a lot of fun — if it wasn’t, I don’t think I could have done this as long as I have.”

He said they have a saying in his industry that “Somebody’s worst day is a normal Tuesday for us.”

“We see all sorts of different variety of medical emergencies from traumas to respiratory issues, cardiac issues, just plain old being sick and weak,” Hanson said. “We’re kind of the jack of all trades for medicine and have to know pretty much everything that’s coming out. It’s being able to help people and do what’s the best for the community when it’s needed.”

Hanson said when the COVID-19 pandemic began, every crew member was nervous to one level or another about what they would encounter while on the job with many unknowns still about the virus.

He personally didn’t want to bring the virus home to his wife and three children, especially because his middle child has significant asthma when it flares up. Because of this, he said he and his wife came up with a protocol for what would happen if he got sick, figuring that he would be the first to get it because his wife was working from home and the children were in school virtually at the time.

Crew members went from only wearing gloves on a call before the pandemic to wearing gloves, a mask, glasses, a face shield, a gown and potentially a second mask for a majority of their calls — anytime a patient had a symptom of COVID-19.

At first, symptoms included things such as cough, shortness of breath and fever, but then the symptoms expanded to include nausea, vomiting, gastrointestinal issues, a headache and sore throat.

“We’re supposed to protect ourselves to make sure hopefully we don’t contract it and get sick — so we weren’t out so we could still come to work and help others,” he said.

He said overall the protocols have helped keep staff safe while at work, and the ambulance service still follows the same protocol for personal protective equipment. Even if a patient has no COVID-19 symptoms, crews still wear glasses, a mask and gloves.

Crews have encountered a wide range of COVID in the people they have treated, ranging from people who were asymptomatic who found out they were COVID-positive from a required COVID swab, to people who had to be intubated and taken by a critical care team because their oxygen levels were so low that they were struggling to breathe.

Lately, he has seen mainly shortness of breath and cough in people who have tested positive.

Though he made it through the majority of the pandemic without contracting the virus, he said he ultimately tested positive five days after his 15-year-old daughter tested positive in January. Luckily, the rest of his family did not test positive.

Despite the enjoyment he finds in his job, Hanson said there are sometimes hard parts, as well.

“Sometimes we see things on calls that stick with you for years,” he said. “It’s learning how to manage that mentally, reaching out, and getting help. We have a great support system for that.”

He talked specifically about the impact of dealing with the loss of a patient — especially younger patients and said that after critical incidents, law enforcement, fire departments and ambulance crews have voluntary stress debriefing sessions where they can get together to talk about a call they responded to.

Even with the lows, he encouraged people who might have an interest in the job to check out the opportunity.

He said the ambulance service is always looking for more people, and there are multiple classes for EMTs and paramedics upcoming.