McDonald’s adapts to ongoing changes in the pandemic 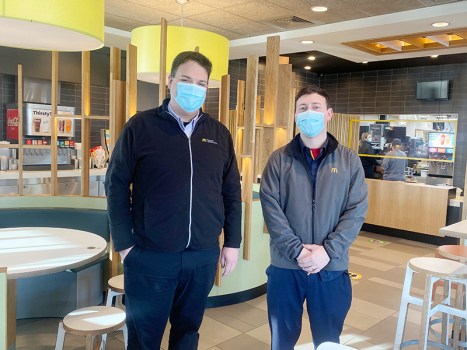 McDonald's area supervisor Tony Segura and Tyler Engel, general manager of the East Main Street restaurant, said they are thankful for their employees who have adapted well during the pandemic and also to the community, which has continued to support the company. Sarah Stultz/Albert Lea Tribune 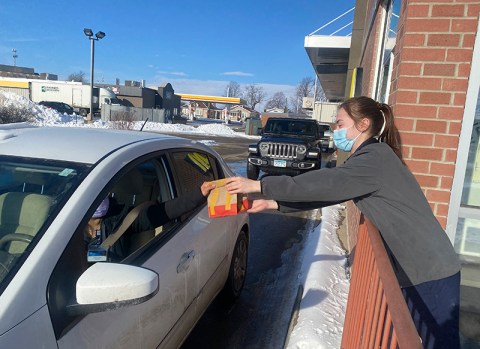 Flexibility and a positive outlook.

That’s the key to adapting during the COVID-19 pandemic for the three McDonald’s stores in Albert Lea.

Tony Segura, area manager who oversees Albert Lea’s McDonald’s restaurants as well as others in the region, said at the start of the pandemic, there were a lot of changes happening very quickly.

“Every day was fluid,” he said.

When the restaurants had to close for dine-in service, they weren’t sure how well it would go over to only have drive-thru available for customers.

Despite their doubts, however, Segura said they ultimately found the response was comparable to sales before the pandemic when both indoor and drive-thru was available.

Tyler Engel, general manager of the Main Street restaurant, said to adapt to the changes, there were a lot of shift changes, and shift managers had to learn on the fly about what changes would be implemented.

At that time, delivery was not an option for the restaurant, and curbside was not yet popular. The restaurant in October 2020 started delivery through DoorDash.

The first year of the pandemic, the McDonald’s on East Main also started a third drive-thru lane during the peak lunch and dinner meal rushes.

“It really did help alleviate the long line to the road,” said Segura, who has worked for McDonald’s for almost 19 years.

To operate the third line, an employee would bring outside a mobile register, and the register would automatically transfer orders inside to the staff making the food. Once the food is ready and bagged, an employee would run the food out to the drivers. Staff used walkie-talkies to communicate.

Segura said the third line was used for most of the summer months in 2020 at that location because of the volume of people who come to that site. Of Courtesy Corporation’s 64 stores, he said some other locations also did the same thing at their restaurants.

The McDonald’s at Trail’s was allowed to be open inside for truckers and travelers after the first five or six weeks of the pandemic, though tables were stacked and blocked off.

The same happened at the Bridge Avenue location, although that site opened again on Christmas break for indoor dining and has stayed open ever since.

“I think everyone knows it’s a challenge everywhere,” Segura said of the staffing shortage. “We’re not exempt from that, but we do have a lot of things in place that help us have the upper hand.”

He said the company tries to be flexible with people’s schedules and promote a people-first philosophy. Even if someone can only work one day a week, it can still be helpful for the overall team.

The company also provides a few different tuition assistance programs for its employees, and he said it provides a good atmosphere and training program.

Despite the challenges the pandemic has brought, Engel, who has worked at McDonald’s almost 19 years, said he always tries to focus on the positive. The company also does contests internally to keep staff motivated.

Engel oversees about 55 people between employees and managers at the East Main location, and Segura said there are about 40 to 45 employees at each of the other locations.

About a quarter of their workers are longtime employees.

Segura said he is a grateful for a staff that has been able to adapt to all of the changes of the past few years.

“I’m so appreciative to have people who are willing to dive in with you and make it work,” he said.

He said he has had multiple people contact him about good customer service, and he receives compliments about the staff regularly.

He also credited the owner-operator of the stores, Courtesy Corporation, who provide a lot of support for their employees.